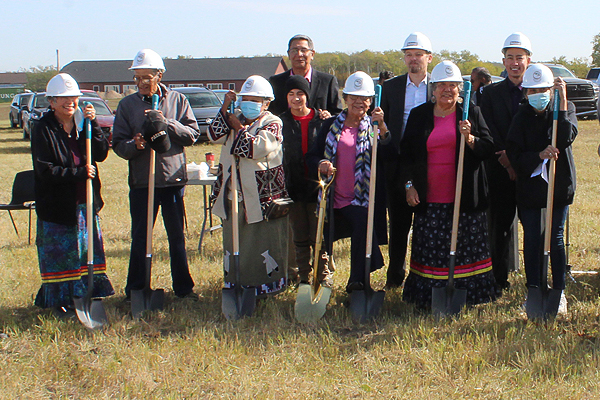 Pasqua Director of Education Maureen Johns, Principal Christina Johns and Chief Matthew Todd Peigan, along with the council and staff have created a back to school safety plan. Students will begin classes October 1. Photo submitted by Chief Peigan

During the 2019 Christmas break, Chief Matthew Todd Peigan paid attention to news about the new sickness in China and knew it was time to bring out the pandemic plans the First Nation had created during the 2003 and 2009 SARS and H1N1 outbreaks.

“It was just a matter of bringing that out and modifying it. To be frank, I think some of the council and some of my senior staff kind of thought I was crazy. When cases started being apparent in Canada, then people started paying attention,” Peigan said.

In those early days, when there were so many unanswered questions, Chief and council had far-reaching discussions about all the possibilities and considered the sorts of problems they might need to solve.

They took stock of supplies on-hand in the community and listed what might be needed. They discussed what on-reserve facilities could be used for isolating members who might test positive or get sick. They even considered where they might have a morgue if things got really bad.

The community hall became the central storage site for food and supplies, including many items ordered from Amazon.

“Everyone started the whole pandemic emergency response on Pasqua. Things really took off on the implementation of that plan,” he said.

On March 12 Saskatchewan had its first presumptive positive case of COVID-19.

Three days later, Peigan addressed the community in a Facebook Live presentation and formally suspended operations of the school, told everyone to stay home and introduced other emergency measures.

Education assistants were reassigned to identify elders and vulnerable community members and to visit them regularly. Community people were hired to staff round-the-clock security check stops at entrances to the First Nation. They kept track of who left and returned in case anyone became ill and non-members were barred entry.

“It was just a plan to ensure the safety of those on reserve,” Peigan said.

Pasqua has approximately 2,450 members, including some throughout Canada and in the U.S. Every adult member received $150 and each household received a $150 grocery card and cleaning kits with hand sanitizer and cleaning products, which were also couriered to far-away households.

“It’s a complete team effort… I cannot thank my staff, my directors, my council enough for all that they do to ensure the health and safety of the people of Pasqua,” said Peigan.

Pasqua Director of Education, Maureen Johns, said development of the school plan began as soon as the K to 12 Paskwa Education Centre closed.

“Our plan has been formed by research, by best practices, by sharing knowledge with other education (and health) directors, cross-Canada research. Interviews were done and we sought out advice traditionally and ceremonially. We had a whole range of perspectives that helped to shape our plan,” Johns said.

From March to June, teachers and staff created packages of assignments that were delivered to the approximately 200 students.

This fall’s school opening has been postponed to October 1, providing time to check the plan with the province and implement it at the First Nation.

The team intends to take a blended approach that will see classes divided in half, with each group alternating days at school with days at home, so that there are never more than 12 children in a classroom.

Education packages are being assembled for students for their at-home days.

Each student family will be supplied with a laptop computer and software package that works with limited bandwidth and discourages Facebook usage. School staff will coach parents on how to deliver home learning.

On the days at school, education assistants will be on buses to take temperatures, sanitize hands and give each child a new mask every day. Kids will sit only with those from the same household.

Those who don’t use the bus will enter the school by a different door and go through the routine there.

Inside, acrylic barriers, supplied by the First Nation’s own Pro Metal Industries Ltd, will separate desks and will be erected in other high-traffic areas within the school.

Portable sinks and sanitizer stands will be placed throughout the building and in each classroom.

Recesses will be staggered with groups of kids kept away from each other to lessen cross contamination, said Principal Christina Johns.

Peigan said it will be expensive to maintain the safety measures but protecting precious life is most important.

“My view and the council’s view is, you shouldn’t put a price tag on life because… what we’re safe guarding is our existence. To ensure that everyone is safe and healthy, I don’t think there’s a price that you can put on that.”