Carol Wylie has painted eighteen portraits — nine Indian Residential School Survivors and nine Holocaust survivors — in an exhibit called, “They Didn’t Know We Were Seeds” which is touring Saskatchewan. The title is inspired by the proverb, “They buried us but they didn’t know we were seeds.” 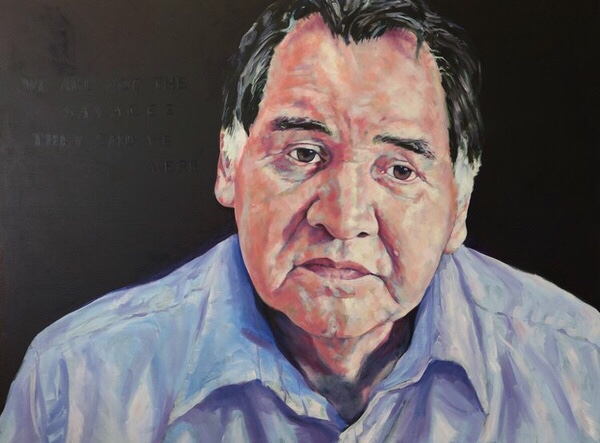 One of Carol Wylie’s portraits is of Gilbert Kewistep, a residential school survivor. Photo supplied

She wanted to capture them before all the survivors had passed on. Kewistep was pleased when he was called in to see her final results.

“I was quite impressed, not only with mine but with the others. She followed protocol, used tobacco, started off with a prayer and did it in a good way. Before she took them on the road, she asked many of us to gather with our portraits and smudged them all and said a prayer so that wherever we take them the spirit of the project reaches out to people in a positive way,” said Kewistep, who was very impressed with the way she did it. “It’s also online. I was quite impressed and my family was as well, they said it’s a good way to remember you and your time at these schools.”

The show just opened in Yorkton and will be going throughout the province before hopefully a national tour. Wylie’s website which features the images notes the connections between the experiences of Jewish Holocaust survivors and Residential School survivors. Indian Affairs Superintendent Duncan Campbell Scott, in 1910, called Residential Schools “The Final Solution,” preceding Hitler’s similar pronouncement regarding the “Jewish Problem.” Both had their hair cut off and were assigned numbers as a means of dehumanization.

Kewistep has had very positive responses from those who have seen it and he is very pleased with that response and the likeness, as well as the respectful and humble way Wylie approached the project, using protocols and including all the survivors in the process. Other residential school survivor subjects include Eugene Arcand, Judy Pelly, and Louise Halfe, among others.