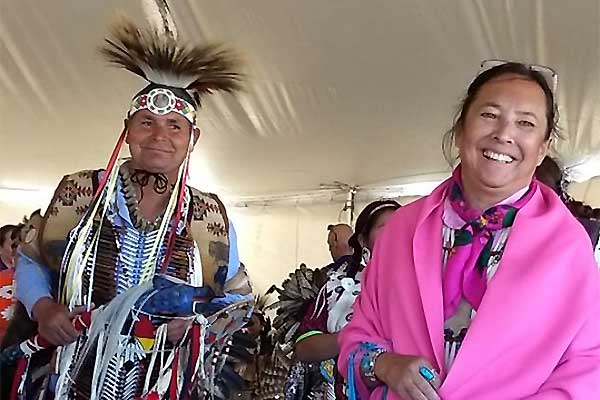 Kim Soo Goodtrack and Stan Lethbridge are active in their local community of the Wood Mountain Lakota First Nation. They collaborated to bring a presentation on Sitting Bull to contribute to Indigenous Storytelling Month. Photo Supplied

Descendants of the followers of iconic Lakota leader Sitting Bull are bringing his story to the public in four Saskatchewan communities.

Story presenters Kim Soo Goodtrack and Stan Lethbridge are descendants of two different women who came to the Wood Mountain area with Sitting Bull, the leader of the Sioux, after the 1876 Battle of Little Big Horn, where General George Custer was killed.

Goodtrack and Lethbridge use chalk drawings and a buffalo hide in a 90-minute talk that will be open to the public at four west-central Saskatchewan schools in February, which is Saskatchewan Aboriginal Storytelling Month.

The Tatanka (Tȟatȟáŋka Íyotake), or Sitting Bull presentations were arranged by The Wheatland Regional Library and Saskatchewan Aboriginal Storytelling.

“Goodtrack tells her story through the creation of a chalk pastel drawing, and Stan Lethbridge brings a buffalo hide and together, they explain the history of Tatanka (Tȟatȟáŋka Íyotake), or Sitting Bull,” as stated in the media release.

Goodtrack and Lethbridge are based out of Wood Mountain and both of their great grandmothers came to Wood Mountain with the influential medicine man and leader, Sitting Bull.

Lethbridge is a traditional Lakota rancher, tanner, and powwow dancer and Goodtrack spent many years as an educator in Vancouver and has worked on many books. Her most recent collaboration is We Are All Connected: Lakota, Mixed Grasslands and Bald Eagles.

The organizers provided the following background for the presentation: After the Battle of the Little Big Horn on June 25, 1876, groups of American Natives began to move towards the Canadian border, as they contemplated Canada as a possible place for shelter from the American Army which pursued them. The Great Sioux War of 1876-1877 would drive almost five thousand of these people into the vicinity of Wood Mountain.

As time went by and the buffalo declined in numbers, the situation became desperate north of the 49th parallel. Most of the First Nations people returned to the U.S. by late 1879. Only Sitting Bull and his immediate following, about one thousand people, would remain. In July 1881, forced by starvation, Sitting Bull returned to the United States with a few hundred people.

Not all the Lakota returned. About sixty people remained behind. They lived off the land, and were finally granted a small reserve in 1913. These few descendants of the great numbers of Lakota who came to Canada in 1876 and 1877 are the only Lakota left living north of the 49th parallel.

Having Saskatchewan Aboriginal Storytelling Month in winter observes the First Nations traditional time for storytelling and libraries, schools and organizations across Saskatchewan have been hosting storytelling events throughout the month of February for 17 years,” the release states.

For more information on the Lakota Legend, please email Susan Clark at sclark@wheatland.sk.ca.