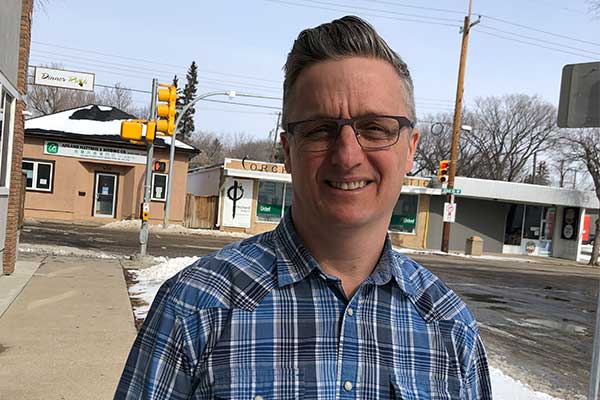 Alan Long, public relations director for Shakespeare on the Saskatchewan, strives to include and acknowledge Indigenous people in plans for the company’s new site design.

Alan Long began life on the white side of Saskatchewan’s racial divide, but his own choices and the revelation of a family secret, set him on a path toward reconciliation and advocacy.

“Growing up in settler society, my main contact with Indigenous people was in town… with all those stereotypes,” he said in recent interview.

Long was taught to be afraid of Indigenous people and to not go near the reserve.

“As you mature, you examine the way you looked at the world,” he said.

Long’s childhood on a farm near Lloydminster was steeped in the story of his heroic ancestor, George Mann, who was the farm instructor at Onion Lake at the time of the 1885 Battle of Batoche and the Frog Lake Massacre.

The family narrative recalled that in the days after the battle that ended the so-called Riel Rebellion, Mann learned that a group of First Nations warriors had killed eight settlers, including the Indian Agent and farm instructor, at Frog Lake. He skillfully escaped with his wife and family under cover of darkness.

Years after completing a degree in agronomy, where Long saw “settler racism on steroids,” he left farming and returned to university, where he studied drama and took Native studies courses.

There, he met Pete Chief, who was a descendant of the Onion Lake chief, Seekascootch, who, Long learned, had saved Mann’s life, by warning him about the killings and telling him to leave.

The Indians saw him drive his horses and wagon into a slough in his panic to leave.

“My whole world really did get flipped upside down… That’s reconciliation slamming you right in the face,“ Long said.

“Then she said, ‘you’ve got to call me kokum now. I’m your kokum, you’re part of our family,’” Long said.

He was stunned by the news, but soon began meeting and getting to know his Cree relations. He also learned that his grandfather had fathered a Cree son, so he has more relations through his uncle Harold Jimmy, from the Thunderchild area.

Long wrote a Master’s thesis in 2007 about the differences between the two narratives.

By then, he had been involved for seven years in Saskatchewan Native Theatre Company (now known as the Gordon Tootoosis Nikaniwin Theatre (GTNT).

He worked with the company’s Circle of Voices program, which helps youth tell their stories through theatre, among other roles in the organization, before becoming general manager in 2011.

He discovered that capital project grant money had been used for operating expenses and the company was in trouble.

Eventually, the former general manager pleaded guilty to fraud and the company’s former accountant was reprimanded by the Chartered Professional Accountants disciplinary tribunal and fined $10,000 in relation to the matter.

GNTN Board chair Irene Oakes joined the board soon after the discovery and says Long led the work to rebuild the company, which is now on solid ground, organizationally and financially.

“The theatre company had to work really hard reestablishing our credibility with our funders. He worked really hard on that. I miss him,” she said.

In 2015 SNTC changed its name to honour Tootoosis, one of its founders. After 15 years with the company, Long moved on.

Now director of Public Relations for Shakespeare on the Saskatchewan, (SOTS) Long continues to advocate for Indigenous inclusion and acknowledgement.

Construction is underway on an amphitheatre on the riverbank that has been home to the tent theatre since 1985 and Long was instrumental in bringing in Cree knowledge keeper Joseph Naytowhow, who has designed a contemplation circle that will be a permanent feature of the site.

A new walkway will follow the river behind the amphitheatre and the entire site will be accessible year round. Walkers will discover a circle of large boulders with interpretive panels, which will acknowledge and celebrate Indigenous history. It will be a place to smudge, pray or tell stories, Long said.

SOTS is hoping to provide a link to Indigenous story telling and theatre through its connection to a project Meewasin is now planning.

“We’re looking at how we can tie into this new story that’s being told about the river valley, about the original people and that story that’s not really a part of any interpretive panel or not that significantly, until more recently,” Long said.

The seeds of plan to create a ceremonial site north of the amphitheatre are also germinating, he said.

Former City of Saskatoon Indigenous liaison, Gilles Dorval, was an early proponent of Indigenous elements for the site.

“Gilles invited me to Reconciliation Saskatoon and he said, ‘Don’t name it the Dead White Playwrite Park…You should make this welcoming to everyone in the community.’ We took that to heart,” Long said.

“There’s a commitment to keep that relationship going forever,” he said.