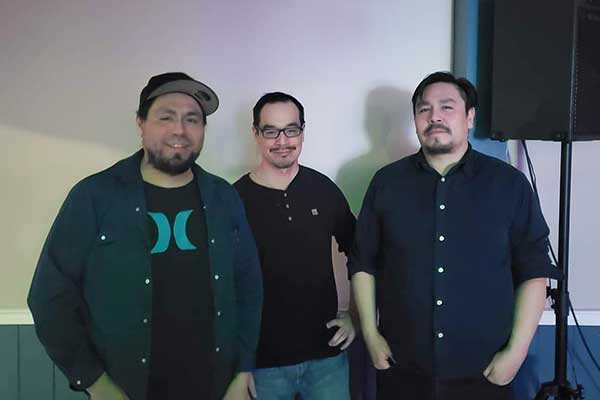 L-R: Jamie Peekeekoot, Kevin Joseph and Ryan Peekeekoot, members of rock band ‘Black Rain’ are currently practicing social distancing, but are looking forward to playing for audiences again when they can. Photo courtesy of Black Rain

Music has always been a family affair for brothers Ryan and Jamie Peekeekoot.

“Our dad played in a band, our grandpa fiddled, and from what I hear, our great-great-grandpa also played the fiddle,” Jamie Peekeekoot said. “We grew up with it.”

The Peekeekoot brothers, along with bass player Kevin Joseph, now form the rock band ‘Black Rain,’ which has toured across the country and even been featured in an independent film.

“We played so many gigs this year – between 70 and 100 gigs all over Canada,” Jamie said. “Every single year we all agree -because we’re all single dads, we’ve got kids at home – that this next year, we’re going to slow down. And every single year we keep hitting the road.”

Ryan, a singer, and Jamie, a drummer, began their musical careers as children.

“We started off playing with our dad,” Jamie said. “We played our first gig with him in Big River when I was around twelve. And then he eventually quit, and every gig that was offered to his band he just forwarded to us. We started from there.”

The bandmates share a passion for rock and roll, putting their creative spin on the genre but always returning to their roots.

“Black Rain is straightforward rock and roll with a bit of country and all kinds of other influences, but nothing too flush,” said Joseph. “Just a touch. The hook is in rock and roll.”

The three musicians take particular pride in performing their own songs.

“We’re one of the few Aboriginal bands that exclusively records original songs that we wrote,” said Jamie. “We’ve only ever recorded one cover, and the rest is all original.”

Black Rain is currently working on their fifth album. And while social distancing measures due to the COVID-19 pandemic are changing their usual writing process, they are adapting.

“We’re using social media to share, even from our telephones,” Joseph said. “We have little snippets of song ideas we send to each other. Since we’re not going to be able to see each other for a while, we’re exchanging songs and finding ways to collaborate that way.”

Still, they are looking forward to being able to perform for audiences again once this crisis is over.

“We’re passionate about putting on a good show every single time we play,” said Jamie. “It’s all about the love of being on stage and putting on the best show we can.”