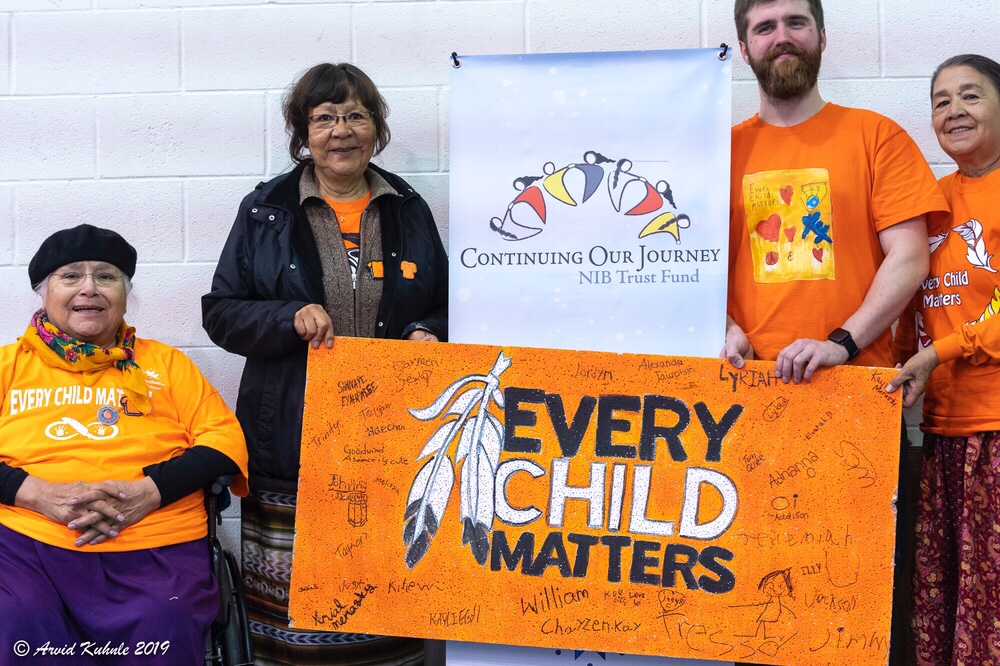 Orange Shirt Day was celebrated across the country to honour and pay respect to the children of residential schools. Many events were held in Saskatchewan where organizations, schools, businesses, and communities wore orange shirts.

Regina citizens gathered at the Regina Public Library to raise awareness about the legacy of residential schools in our community. The event kicked off with a pipe ceremony at mâmawêyatitân centre and gatherers met at the downtown library to listen to stories of survivors.

This year’s program included an exhibition of artwork by students from Balcarres Community School, created in collaboration with resident artist, Holly Yuzicapi.

The exhibit, titled Igniting the Spirit of Reconciliation, featured artworks that captured the students’ responses to the Truth and Reconciliation Commission’s 94 Calls to Action.

Amy Seeseequasis, Director of Speakers Bureau for the Office of Treaty Commissioner, spoke about Orange Shirt Day and Reconciliation.

This year’s event is the result of a partnership between Regina Public Library, the City of Regina, Farm Credit Canada, SaskPower, SaskTel, SaskGaming, SaskEnergy, SGI, the Regina Police Service, Regina Catholic Schools, and the Governments of Canada and Saskatchewan.

The Saskatchewan School Boards Association (SSBA) encouraged residents of the province to participate in “Orange Shirt Day” by wearing orange and reflecting on residential schools.

“This annually proclaimed day is an opportunity for all of us to take time to think about residential schools and grow in our understanding of this history,” said Dr. Shawn Davidson, SSBA president in a media release.

Orange Shirt Day is officially proclaimed on Sept. 30 each year and is part of a larger movement in the country to provide opportunity for First Nations, governments, schools and communities to unite in a spirit of reconciliation and hope for generations of children to come.

“Learning about our shared history by recognizing the truths about the past and advocating for understanding is vital,” Deputy Premier and Education Minister Gordon Wyant said. “Everyone has a role to play in reconciliation and Orange Shirt Day provides an opportunity for our province to recognize the history and impact of residential schools as we continue on the path to healing.”

Orange Shirt Day was first proclaimed in Saskatchewan in 2016, in response to a resolution passed by the province’s trustees at the SSBA Spring General Assembly.

The Federation of Sovereign Indigenous Nations (FSIN) Executive honoured the thousands of First Nations children who were victims of Indian Residential School policy in Canada.

“It’s estimated that approximately 150,000 First Nations children attended residential schools in Canada. Many of them, victims of severe physical, mental and sexual abuse, malnutrition and neglect,” said FSIN Chief Bobby Cameron. “This was genocide committed on our most vulnerable and our people and communities still suffer from the lasting, inter-generational effects of this destructive Canadian policy. We must remember and commemorate them, especially the thousands of First Nations children that did not come home from school. Every child matters.”

CUMFI held a pancake breakfast for Orange Shirt Day and a round dance ended the day at the White Buffalo Youth Lodge with this year’s theme as “Every Child Matters.”