Saskatoon Elder honoured after many years of service

Elder Mike Maurice was honoured by many of the institutions and organizations that have benefitted from his guidance in a retirement celebration at St. Michael’s Community School in January. 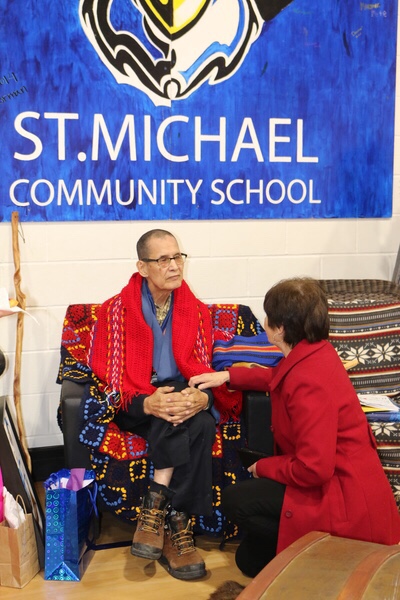 Elder Mike Maurice has tirelessly served numerous organizations in and around Saskatoon up until his recent retirement.

Sitting on a couch set up for him in the gymnasium with his daughter Jacqueline and grandson Grayson, he was celebrated during a school assembly surrounded by a small red river cart, sashes, and other Métis set pieces along with the love and enthusiasm of the full student body who said over and over how much they would miss his presence in the school.

Community members joined in his accolades and gave him thank you gifts, led by St. Michael’s school principal Mike Thorson.

“Greater Saskatoon Catholic Schools, CUMFI, GDI, SUNTEP, SaskPolytech, Saskatoon Fire Department, Saskatoon Police Department, Eagle Feather News, Big Brothers and Big Sisters...and that’s just a hint of who Mike has been involved with. We feel so blessed to have had his influence in our lives as staff, and students,” said Thorson, adding that “Moshum’s” absence has been noted at school by all.

Greetings also came from the Catholic School Board, and the Police Board. Deputy Chief Yuzdepski said it was an honour to be there honouring Moshum Mike Maurice.

“Mike is one of those kind gentle souls that has helped the police service for years, as part of a group of Elders,” said Yuzdepski, who added that they discuss issues and policing and participate in ceremony led by the Elders. “One thing that I’ve always appreciated is his kind soul, his wisdom, and his guidance...not only have the police service benefited but the greater community. Thank you so much for all of your help, guidance, and wisdom.”

Presentations of various gifts included pictures from the Greater Saskatoon Catholic School Board, a lifetime achievement medal and other presents from CUMFI, a framed poster from Gabriel Dumont Institute that will also go out to schools, a diamond willow walking stick from SUNTEP, and gifts from SaskPolytech, and St. Michael’s School.

“You need to get along to accomplish many things. Listening and learning from one another is better,” said Karon Shmon from GDI, quoting Mike’s gem of wisdom which is featured on his poster.

Cort Dogniez presented a beautiful vest from SilverWolf Trading Post on behalf of the school, along with the St. Michael’s school sash, and a video thank you from the students and staff. Following that, there was some jigging and fiddling by the students to close the retirement celebration, and then visitors got a chance to chat with Mike, give individual thanks, and share bannock and tea.

“Mike and I have been working together a long time,” said Senator Nora Cummings afterwards, reminiscing about their longtime involvement in the community.