In a symbolic commitment to treaty education, all 27 school board chairs in the Saskatchewan School Boards Association (SSBA) were presented with treaty medals on Friday. 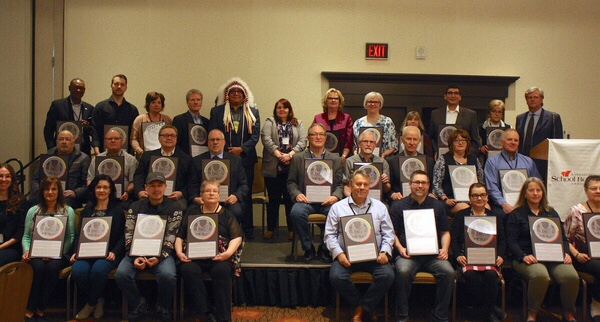 The presentation of the treaty medals come by way of a resolution signed at the SSBA fall general assembly in 2017 to encourage all schools and board offices to display the treaty symbol.

In recognition of that resolution, a memorandum of understanding (MOU) was signed between the Federation of Sovereign Indigenous Nations (FSIN), the Saskatchewan Indigenous Cultural Centre (SICC), Office of the Treaty Commissioner (OTC) and SSBA on reconciliation through treaty education.

“As leaders in the education sector, we all know how important it is for Canadians to learn about treaties, what they represent, and how they shape our country,” said Shawn Davidson, SSBA President.

SSBA plans on having treaty medals publicly displayed in all of their schools.

FSIN Second Vice-Chief David Pratt spoke on how he hopes this continued commitment to treaty education and recognition may help reverse some harmful illusions about First Nations people.

“There are a lot of misconceptions and negative stereotypes out there when it comes to First Nation people in Saskatchewan. I think education is going to play a big role in addressing some of those negative stereotypes,” said Pratt. “First Nations need champions in the classroom. We need teachers to believe in First Nations, to believe in our kids and give them hope. That's our job as educators - take that little spark and give them hope.”

“A 43 percent graduation rate is terrible for First Nations people,” said Pratt. “When those children have a strong sense of identity and who they are in their culture and language and heritage and history, they see that in the classrooms that they're going to be successful. That's what the education system has to do in Saskatchewan.”

Pratt said that the ripple effects from residential schools are still felt by young generations today, and more work needs to continue to recognize and support First Nations students.

“There's going to be challenges along the way but we can't lose sight of the future. Remember, always bring the focus back to the child. It's about the children and helping them succeed.”