Sci-fi with a mental health theme 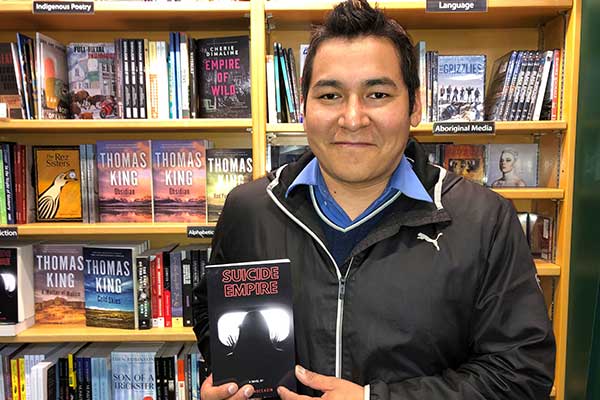 Comedian, satirist and now an author, Ryan Moccasin has written a novel that explores technology’s harmful impact on society and how a future government uses technology to treat it. Photo by Betty Ann Adam

As a stand-up comedian, Ryan Moccasin loves to make people laugh, but his new novel explores what makes people sad.

“I wanted to write about mental health. I see Indigenous communities and the mental health crisis that we have been facing for some time… I wanted to go there and explore that with a science fiction novel,” Moccasin said in a recent interview.

Suicide Empire is about a dystopian future where governments have turned to advanced technology to solve a mental health crisis that is plaguing the nation and about the struggle for people to take back their humanity.

“It highlights the harmful effects of technology on society… Human connection is more important than technology in the end,” he said.

Moccasin, who is a member of Saulteaux First Nation who lives in Saskatoon, is best known for his wry view of the world in stand-up routines at venues around the city and as “propaganda minister” at TheFeather.ca, an Indigenous satirical website he created with buddies Shawn Cuthand and Danny Knight.

While politics and current affairs are the focus of the trio’s humour, Moccasin has a personal interest in mental health: he got sober two years ago.

He was surprised by how important counseling therapy was in his journey. Like many people, he used to scoff at the image of a person lying on a couch, while a man with a beard and a notebook sat by silently.

“People have this stigma about going to a therapist or a shrink, they call it. They’re nervous and don’t know how to approach it.

“It’s so far from that… it’s basically like talking to a friend… Your thoughts are like a ball of yarn, all tangled up, and the therapist is there to help you knit it into a nice sweater, organize your thoughts.”

“Going through it, I realized this is actually helpful talking to somebody, an addictions counselor. We need more of these resources for people who need help, especially the Indigenous communities,” he said.

In therapy, Moccasin learned about depression and anxiety - common problems for people with addictions.

He became a fan of funny and informative podcasts, especially The Hilarious World of Depression, which made him laugh while showing him he wasn’t alone.

He also read, and was inspired by, the somewhat daunting classic book, Man’s Search for Meaning, by Victor Frankl, a survivor of the Nazi death camps who dove deep into the effects of human suffering and how people can overcome it.

“It’s been around for 50 years but it’s on my recommended reading list for sure,” Moccasin said.

He thought about writing non-fiction, but with storytelling being such an important part of Indigenous culture, he decided to talk about the issue in a novel.

He loves science fiction and was inspired by The Hitchhikers Guide to the Galaxy, Flowers For Algernon and the George Orwell dystopia, 1984.

Suicide Nation, which includes five pages of Canadian mental resources, was self-published. It went on sale on Amazon on Jan. 7 and quickly became one of the top three sellers in the Native American section and top 900 in the science fiction category.

It is available at McNally Robinson in Saskatoon, where a book launch will be held March 6.