STC and the City of Saskatoon Reconciliation Agreement 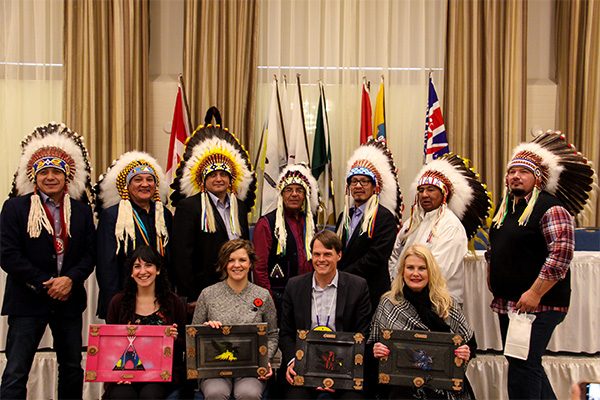 Both Mayor Charlie Clark and Tribal Chief Mark Arcand know working together is imperative at this time. “We have a history of working together, but as we understand this era of reconciliation, the Tribal Council provides many services in the City to their members who are also citizens of the city,” said Clark. “There are many ways where we overlap in recreational services, transportation and housing. Having a formal agreement that in endeavoring to work together we can have the right point people in the City and Tribal Council helps to make the relationship stronger, and clearer and smoother. We have a lot of work to do to close the gap in outcomes between Indigenous kids and non indigenous kids. Everyone should have the chance to be successful in this city.”

Chief Arcand thinks the agreement is a big step. “This is what Treaty was all about. To work together with people so we can all have a good quality of life. This is tremendous. I would like to see other cities do the same thing with other First Nation organizations.”

The relationship between the city and STC is often looked to as a best model for those looking to work together. “The City and our people have a long history of working together in Saskatoon. From Chief Whitecap being one of the founders of Saskatoon. The urban reserves with Muskeg Lake, Yellow Quill and One Arrow. That’s about partnerships and relationships. I’m really proud of our Chiefs. They have taken the step to work together.”

There have already been discussions on energy development, education partnerships are in place as are transit agreements and the phenomenon of Reconciliation Saskatoon. But one of the main challenges acknowledged by both leaders was the current crystal meth crisis and access to rehabilitation and the creation of a drug treatment court.

“I’m very happy for Mayor Clark and the Council to take this initiative with the Tribal Council. It will set a standard for the rest of the country. There are a lot of negative things happening across this country to First Nations people. It is opportunities like this that build relationships. We have too many people in jails and kids incarcerated and in the child welfare system. We can work together to end those issues.”