Earlier this week, during a Saskatchewan School Boards Association (SBBA) Annual General Assembly, the Premier’s Award was presented to the Greater Saskatoon Catholic Schools, the Saskatoon Tribal Council (STC) and the University of Saskatchewan. The three institutions received the 2017 Premier’s Board of Education Award for their joint submission of ‘ni ahkwatonâmonân: An Indigenous Language Pathway to Improved Student Learning Outcomes at St. Frances Cree Bilingual School.’ 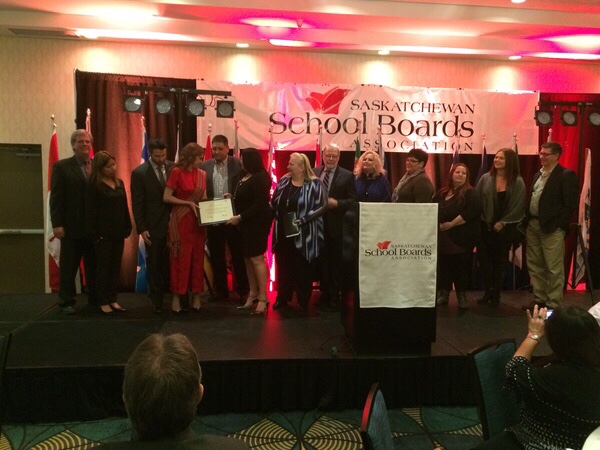 The 2017 Premier’s Board of Education Award was presented to the Greater Saskatoon Catholic Schools, the Saskatoon Tribal Council (STC) and the University of Saskatchewan earlier this week. Photo supplied by Joe Couture - Saskatchewan School Boards Association.

“I want to congratulate the partners for winning this year’s award,” Saskatoon Churchill-Wildwood MLA Lisa Lambert said in a media release. “This award honours the great work they are doing at St. Frances Cree Bilingual School, expanding opportunities for our First Nations and Métis students to improve their learning.”

Diane Boyko, the Board of Education Chair at Greater Saskatoon Catholic Schools, said it is very gratifying for a program that embraces Indigenous language, culture, identity and community to be recognized.

“We are both honoured and humbled to receive this award for the Cree bilingual program at St. Frances,” she said. “When we started this journey with our partners years ago, it was a bit of a risk. We were optimistic about its success, but there were a lot of unknowns about how a Cree language program would be received in the medium- to long-term. Ten years later, we have a thriving school community.”

“One of the TRC calls to action mentions that Aboriginal languages are a fundamental and valued element of Canadian culture and society, and there is an urgency to preserve them,” said Tribal Chief Mark Arcand, Saskatoon Tribal Council. “This award demonstrates what incorporating our identity and language can do for a school in the city of Saskatoon where the Indigenous population is steadily increasing.”

Michelle Prytula, the U of S Dean for the College of Education, said the St. Frances Professional Development School (PDS) is designed for high student achievement and targeted teacher learning.

“Through its focus on Indigenous student identity and Indigenous language and culture, it sets the bar for teaching and learning models province-wide,” Prytula said.

The Premier’s Award prize, in the amount of $3,000, is to be used to support or extend the innovation or project. It was first introduced 18-years-ago with a mandate to recognize educational innovations and improvements that focuses on student achievement.

“The Premier’s Award shines a spotlight on great work being done by boards of education throughout the province,” said SSBA President Dr. Shawn Davidson. “Although there is only one recipient of the award, each submission is worthy of recognition for advancing the goal of improved outcomes for all students.”