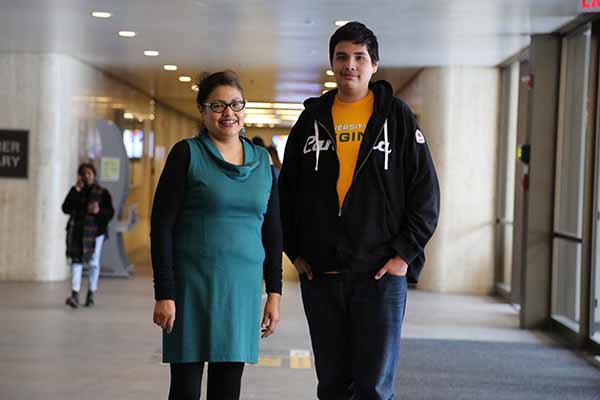 Kerry Benjoe and son, Chancelier Deneyou, having a moment in the hallway of the U of R, where they are both enrolled as students.

Kerry Benjoe decided in 2018 that she was going to have her leg amputated.

The Indigenous journalist and graduate student at the University of Regina’s School of Journalism, had suffered a foot injury about five years ago, after she was pushed.
Benjoe describes herself as “an independent, single mom who work(s) in a field that helped me tell the stories of Indigenous people.”

Sharing stories through her writing was a passion Benjoe thought she might have to give up.

“I dealt with the pain secretly for a long time, but after a while, I could not deal with it anymore,” Benjoe said about the ordeal. She made up her mind after learning all the treatment options from her doctor.

“I made the decision to go through the surgery by myself,” she said. “For me, the possibility of amputation was always at the back of my mind. I did not have to, but I realized, if I don’t do it now, I would have to do it at some point.”

She believes knowing the options gave her the strength to make the decision alone. As she expected, the news was received with some tearful reactions from her family members.

“My mother is a very strong woman and I have only seen her cry twice, the day I told her about my decision and the day of the surgery,” Benjoe said. “It made me feel in a way that I was the cause of her pain.”

Along with the physical pain she was experiencing, Benjoe took on this emotional burden, too.

“I knew I had to be strong for everyone, so I did my best to always have a smile on and stay brave,” Benjoe said she recognizes now, that by not dealing with her mental status upfront, she started a downward spiral that hit bottom in May.

“I had these little milestones in the hospital, like being able to walk, that gave me strength,” she said. “It was when spring came that I had to decide whether or not I was going to cover my leg that I had to come to terms with the idea that I wasn’t me anymore.

“I did not leave my house for about a month. The reality that I had to give up my career as a journalist started to really hit me and I slid into a depression.”

Benjoe credits making it past that dark mental state to three major things: writing, going out for wings with her friends and her son, Chance Deneyou, a first year student at the University of Regina.

“Chance was the main person who made sure I was taking all my medication, eating and ensuring that I had someone with me when I needed it the most,” she said.
For Deneyou, being his mom’s rock was a privilege.

“I saw it as a way to give back to her for all the years she has taken care of me,” Deneyou said. “I love my mom.”

Benjoe had a support system, but some Indigenous students do not have the same help.

Shadi Beshai, associate professor of psychology at the University of Regina, says that despite Saskatchewan’s high number of Indigenous people, services are lacking.

“I was dismayed to find out that Indigenous people here don’t have a lot of mental health options specific to their needs and cultural orientation,” he said.

Beshai plans to provide Indigenous students at the U of R with a mindfulness based intervention that he’ll adapt to the needs of Indigenous people.

Beshai will use a $165,000 grant from the Canada Institutes of Health Research on the three-year project.

The team will begin recruitment next year as well as create a guideline for the mindfulness treatment as it concerns Indigenous people. After it has been tested on a small group of students, Beshai hopes the project will start a conversation about using mindfulness as a cross-cultural tool for mental health.