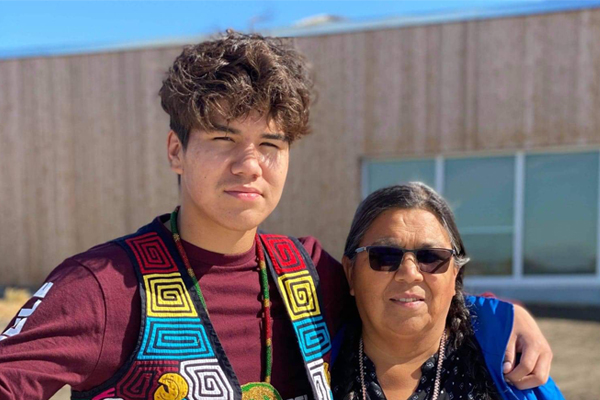 Davis Swindler and his grandma Ira create various Cree videos where they speak to each other only in Cree. Photo submitted by Ira Swindler

A young, fluent Cree speaker from Thunderchild First Nation speaks his first language to honour his grandfather, who was forbidden to speak his native tongue in residential school.

Davis Swindler, 17, was raised by his grandparents Ira and Maxwell and grew up only speaking Cree. Ira recorded a video of him when he was 8 years old speaking Cree to his grandpa. Many years later, that video was uploaded to Facebook and it went viral.

“I got a lot of responses from that video,” Swindler said. “People would message my grandma to ask for me to send voice clips… saying different Cree words. Eventually it got so big, that I started getting invited to schools across Canada. It got bigger than that and I started speaking at youth conferences.”

He was raised to live off the lands. At a young age, he became an avid hunter and would donate his hunt to local Elders. Eventually, his Grandma Ira knew that he would need other tools to survive in both worlds.

“My grandma would teach me some English words every day,” he said. “My grandpa didn’t really like it but she had to convince him that I wouldn’t succeed without the white man’s language.”

Maxwell is a residential school survivor and was beaten for speaking his language, but that pushed him to speak his language even more, Ira said.

“He always proclaims that they beat the language into him instead of out of him,” she said. “This is how we raised Davis. Our home consisted of everyone speaking Cree.”

She told her grandson, “our language isn’t lost, it’s merely sleeping. We need to wake it up.”

“I hear him talking about the sacredness of our language. I tell him, ‘when you speak our language, you’re closer to the Creator because our language has a spirit and it is sacred,’” she said.

Ira and her husband are proud of the man Davis is becoming and they know they did a great job raising him.

“I’m saddened that he’s becoming an icon (for speaking) the language when we should all be speaking it,” she said. “But I am also very proud of him. Kids need to hear that positive enforcement and we can’t always concentrate on the wrongs they do.”

Another Cree speaker, Aaron Checkosis from Poundmaker Cree Nation, recognized Swindler in a parking lot and made a recording of himself interviewing Checkosis in Cree.

“I asked Davis why is it that our young ones are not speaking Cree? He said, ‘they are not trying. They have to keep trying,’

“He said ‘our language is not gone. It’s still there, it’s sleeping…it’s not too late to speak your language.’

“Davis made me proud when I first saw his video that he did with his moshom, when they were speaking fluent Cree to each other when he was a young boy. It’s not every day we see young ones speaking our language,” Chekosis said.

Swindler also speaks Cree around his friends and peers at school.

“I try to encourage my peers to learn the language,” said Swindler. “So far, hanging out with me is doing them a favor. They are picking up on the Cree language.”

Swindler hopes to have a career as an architect or a doctor one day but will always keep that traditional balance in his life.

“I want to encourage others to keep trying to learn your languages and never let them be forgotten,” he said.