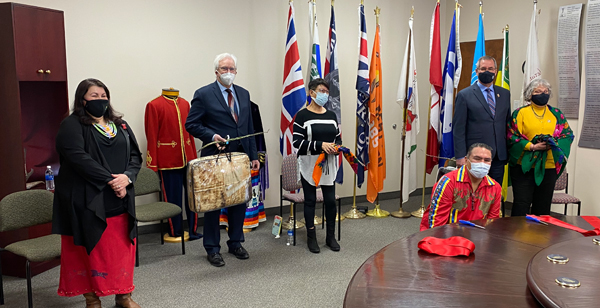 When Mary Culbertson came into the role of Treaty Commissioner three years ago, she inherited stacks, boxes and storage containers full of documents and items related to Treaty history spanning over 150 years.

Almost immediately, she knew something had to be done about this wealth of materials that had been collected - but not catalogued - since the OTC was founded in 1989.

“Shortly after I began, I actually had a request from a gentleman to come and look for material,” she said. “And so, he came - and where could I point him to? Where could we show him? I was just so truly embarrassed to have him trying to squeeze in between things and me trying to look through boxes.

“And I thought, this is just not going to do it. When we get more and more requests, how is this going to work?”

Right away, Culbertson knew the OTC needed to organize, preserve, and share these valuable documents and items. Now, three years later, the OTC Library and Archives has opened to the public.

Historian Sheldon Krasowski, author of No Surrender: The Land Remains Indigenous, is the coordinator of research and archives for the OTC. He says the process of turning these documents into an organized, accessible resource was a momentous task - but the work has been more than worth it. Now, the public has access to a historical collection of extraordinary breadth and depth.

“The archive is Treaty-focused - because that is our mandate - but we look at treaties very broadly,” he said. “So it does include things like Métis scrip, early treaties between First Nations, the treaties that were in place prior to the arrival of Europeans [and] the collection includes information on all treaties in Canada, not just the ones in Saskatchewan.

According to Krasowski, one particularly important section of the archive contains elders’ treaty oral histories - some audio recordings, some films, and some with English translations available alongside their original languages.

“I think that’s the key part of our collection, in some ways,” he said. “In a lot of archives, the oral histories can be an afterthought - the focus always seems to be on paper, on what’s written down.

“But treaties are so integral to the relationship between Indigenous and non-Indigenous peoples, and a lot of that information about the spirit and intent of treaties is captured in the oral histories.”

Culbertson says some of the items in the archive may also have a direct impact on First Nations’ advocacy and legal concerns today.

“Some of our microfiche have original reserve surveys on them,” she said. “We have treaty pay lists. Those things are truly relevant and historical, especially when it comes to many First Nations and claims where they’re trying to rectify the wrongs that have happened since the treaties were entered into and how those obligations were not fulfilled.”

For now, due to COVID-19, the OTC archives can only be accessed online at www.otc.ca. When it is safe, the public will also be invited to visit the archive at the OTC’s reading room in Saskatoon.