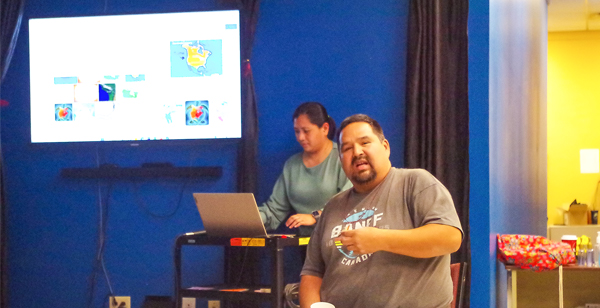 Hugh Merasty, (seated) a Cree storyteller, shares the Cree Creation story with members of the Prince Albert Multicultural Council during a Diversity Night celebration. Merasty believes stories should always be shared with anyone who is willing to listen. Photo by Marjorie Roden

The night began with Hassler, sharing the information about the land acknowledgement and how it is a part of the National Truth and Reconciliation’s Calls to Action.

“The land acknowledgement is not only saying it in the beginnning, and reading it, but it’s more giving yourself a reflection about the story and the history of the land,” she said. “(It’s) also, self-reflection about the stories you’ve heard about Indigenous culture or the stories you’ve heard about Canada or the land that we are standing on right now,”

Hassler encouraged the crowd to do exactly that whenever they hear a land acknowledgement being given. She said doing that every time is a way to honour the true history of the land and the Indigenous people in Canada.

The story was filled with moments of seriousness, laughter, sadness and hope.

Traditionally stories of the Cree trickster Wisahkecahk are only told in the winter.

Merasty shared the many sacrifices the animals made and told the story in its traditional form.

After he was finished, Merasty had a chance to chat about the origins of the story and why it is significant.

“They (the ancestors) came from the east, in the northwest from the Algonquin family, and they’re very diverse with the languages there,” said Merasty. “There are five sub dialects of Cree, and then there’s Ojibway, there’s Saulteaux, Anishinabe, the Oji-Cree…there’s a bunch of them.”

He explained the history of the Indigenous people is contained within the creation story.

He said traditional stories today are still passed down from one generation to the next.

“I do have a few mentors or teachers,” said Merasty. “One is not too far from here. He’s a Saulteaux, from just south of Melfort, and his stories and his teachings are very similar to others I’ve learned.”

Another teacher and mentor is from Frog Lake, Alta. and said the other storyteller in his life is his father.

Sometimes the animals in the stories may change, but basically the creation stories all have similarities.

Merasty said the stories are old and are meant to be shared.

“I mean, why keep it to myself?” he said. “What’s going to happen if I leave this world? I just try and share it with everyone, and I always try and spread kindness because you don’t know what another person’s going through in their life.”

He believes storytelling is a way to help spread kindness.

“Why spread sadness, or why spread anger, or hatred, or anything with negativity in general,” said Merasty. “Try and share positive things and good things.”

The Multicultural Society Hall was packed for the event, which Hassler and Merasty took as a good sign.