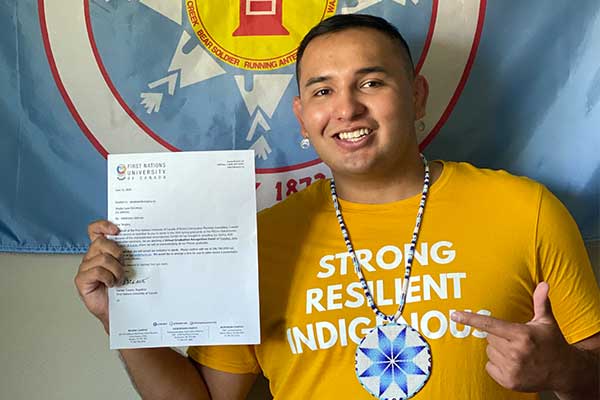 Waylon DeCoteau, proudly Lakota/Dakota and Aniishnaabe from Standing Rock and Turtle Mountain, is FNUC’s 2020 valedictorian. A champion wrestler, he has been accepted into medical school in North Dakota. Photo provided

The valedictorian for the 2020 First Nations University of Canada graduating class is Waylon DeCoteau, proudly Lakota/Dakota from Standing Rock, and Aniishnaabe from Turtle Mountain. He mostly grew up in Turtle Mountain Reservation, his father’s reservation, after spending his first eight years in Standing Rock.

“I came to FNUC on an athletic scholarship in wrestling,” explained DeCoteau, who didn’t know what to study but knew he wanted to be a physician. “Five years later I’m done my biology degree and start medical school in two weeks.”

He will be studying medicine at the University of North Dakota in Grand Forks. As a very young person he wanted to get into healthcare like his mother, who is a nurse practitioner, to help his people. In the USA, Indigenous members fall under treaty health care with the Department of Defense in Indian Health Services.

“They are federally managed and there are clinics all over but they don’t have community members in them, there are usually a lot of people from very far away,” said DeCoteau.

As a community member he has more context. “For example, understanding alcoholism as a symptom of historical trauma and that’s why I decided to chase this pursuit.”

In wrestling, he placed second nationally twice in three years., he enjoyed his time on the northern side of the border.

“Before, I didn’t know anything about Canada besides going to Brandon and Winnipeg a few times,” DeCoteau said, noting that he has relatives in Manitoba. “I came up for a visit in my grade 12 year and saw FNUniv and thought wow, this is a place I want to learn.”

He has peers all over the USA going to Ivy League and big-name schools, but he had opportunities to hear Elders speak in labs and classes and was exposed to traditional knowledge, which was unique to FNUniv.

“It was something I enjoyed and it meant a lot to me and helped me to feel connected rather than just showing up and learning,” he said, adding that the employees and professors also made campus a welcoming place. “I didn’t know anyone, I was away from my community, and the professors really helped me feel comfortable and not miss my family so much.”

He was surprised and honoured when he found out a week before convocation that he was going to be the valedictorian.

“I was doing pretty good with school, the coursework, and I had a lot of fun,” he said, adding that it feels good to be recognized for all the hours spent studying. “This is something my parents and family can be proud of. As I’m getting ready for medical school, getting this awesome news is something I’ll be proud of for the rest of my life.”

DeCoteau says the thought of helping those who need it is what got him through school, and he wishes good luck to his classmates, those still studying and still in high school, as he continues on his post-secondary path.