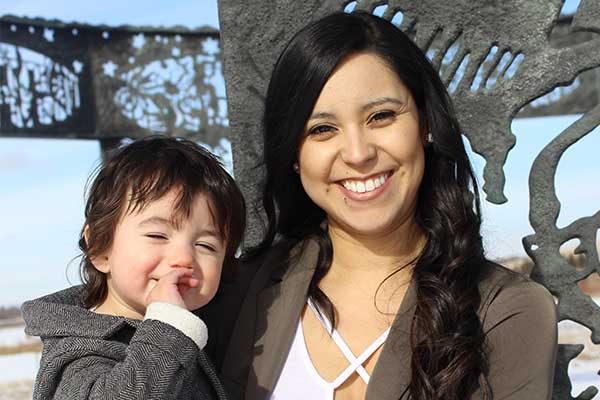 Destinee Peter (R) and her husband have chosen to raise son Theo (L) as a feminist because they believe in equality among the sexes and believe it is important for their son to know his mom works just as hard as his dad. Photo by Kaitlynn Nordal


From a young age, many women are told so sit down, look pretty and not to question the inequality they face on a daily basis.

Reflecting on International Women’s Day, which was on Mar. 8, three Saskatchewan women say how they challenge the status quo to make the world a better place.

Carmel Crowchild, who owns Carmel Indian Agent 138, a Regina medical and justice advocacy service for people who can’t afford them, said she has been a feminist since she was a child. In the 1990s, when trying to leave an abusive marriage, the ideas of feminism and gender equality were truly entrenched in her.

“Being First Nation, in my family, we honour the women,” said Crowchild. “So, from a young age, I watched that honour system … and I was grateful for that because that’s what taught me that I was not my husband’s property. I truly believe the matriarchal system that I was raised in gave me that skill to leave and no longer be a property.”

Crowchild found that some people still disapproved of divorce, regardless of what was happening behind closed doors.

“I was disowned by family when I divorced and I stood strong. I stood my ground. I’m very grateful I did. So yes, I would have to say I’m a feminist because I went against the grain,” she said.

Rachelle McHenry, of One Yoga, Vinyasa Yoga for Youth and the Saskatchewan Indigenous Yoga Association in Saskatoon, grew up in a single-parent household. Watching how hard her mother worked reinforced her belief in the need for feminism and gender equality.

McHenry links those concepts to the Missing and Murdered Indigenous Women and Girls epidemic. She often sees reports about missing young girls and knows the statistics in Canada are high.

“So, to me, that says that it still isn’t equal. The fact that they are female and then you add on Indigenous,” McHenry said. “Patriarchy is still dominant in today’s society and so (feminism is) not an outdated concept at all.”

Destinee Peter, the owner of Tangled Hair and Beauty in Regina, describes herself as a feminist for the simple fact that she believes in equality between the genders, but she thinks there is a way to go before truly achieving it.

“I think there is still a lot of people out there that are against it and don’t treat women with respect and equality. I don’t think women get the same respect as men,” she said.

Despite this, Peter hopes society is heading in the right direction.

“I think people are focusing more on the power of women, the strength that women have and what we can do,” she said.

For Peter, it is important to raise her one-year-old son, Theo, to be a feminist.

“I want my son to have a lot of respect for women and not degrade them and to see how hard his mom works, as well as his dad,” she said.

Crowchild said it is also important to have men part of the conversation.

“Men also need to have a voice in women’s rights,” said Crowchild. “How many of these young men witnessed their mothers going through their trials and tribulations and wished they could change it? There is a man’s point of view here … there is a male responsibility here.”

McHenry agrees and said she has seen her yoga class help men deal with toxic masculinity they see and hear daily. Youths, especially, are often bombarded with images of violence against women, she said.

“The more that we can get role models out there that are Indigenous and are rising up, that is also going to let others know it’s Okay to rise up, to set yourself high,” McHenry said.

Crowchild advises young women to stand up for themselves.