At a press conference surrounded by Chief from across Saskatchewan, Bobby Cameron announced his intention to run for Chief of the FSIN again at the October Election Assembly.

“We have unfinished work to do. I want to continue the focus on the Treaty right to shelter and education,” said Chief Cameron. “Consistency and stability is our message.”

Cameron is hopeful that progress is made. He points to the relationship with the federal government and Prime Minister Trudeau as evidence.

“We are 98 per cent certain that Prime Minister Trudeau will be attending our Chiefs Assembly in May. We have never had this before and it shows that his team is committed,” said Cameron. “We do know we have a long way to go and need 10,000 houses in Saskatchewan alone to get to standard but we have had some successes.” 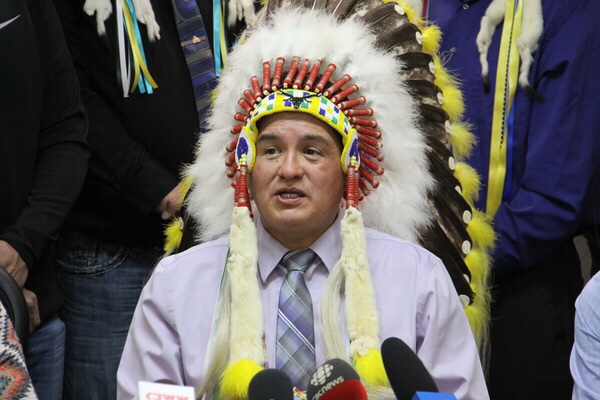 The FSIN Assembly is on May 23 and 24. The Election Assembly is October 24 and 25 where First and Third Vice Chief positions are also up for election.