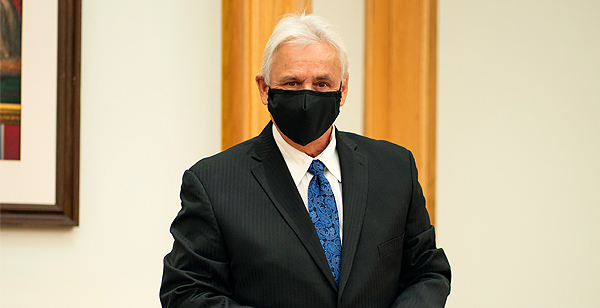 David Kirton is returning to news scrums at Saskatoon’s City Hall but the former broadcast journalist will be the one answering questions as the newest addition to city council.

The Metis man spent more than four decades as a journalist covering city hall in places like Saskatoon, Moose Jaw and Edmonton before he was elected as the Ward 3 councillor in the November municipal election. Kirton replaces Ann Iwanchuk, who chose not to seek re-election.

“It’s been a learning curve that is virtually vertical,” Kirton said of the career change. “It’s great. I was expecting it to be bittersweet but I’m so involved in what I’m doing right now that I haven’t had a chance to look back and wonder if I’m doing the right thing or not.”

Kirton was sworn in as a councillor on Nov. 16th and it was a job that required him to hit the ground running.

The former radio man decided 43 years in journalism was the time to leave the microphone behind and make the jump to civil service.

By giving up his career in journalism, the free time allows him to put full time hours as a councillor, which he says will be needed.

“I know that there are a lot of reporters who don’t like covering city council. I was fascinated with it from the beginning -- I’m passionate about it,” Kirton said.

The election went ahead under the looming presence of the COVID-19 pandemic. It was further complicated by a snowfall which delayed the election five days, from Nov. 9th to Nov. 13th.

The new council is also required to meet on the first Monday after the election, which meant Kirton and his new colleagues on council only had a weekend to prepare rather than seven days.

Kirton describes the amount of information he has had to process in the days since starting the job as, “mind boggling, in a good way.”

“That’s a little bit frustrating, I must admit, but I’m learning as I go. Hopefully over time, I’ll learn to become a more effective city councillor and be able to help them and know exactly where to go,” he said. “I’m still fumbling a little bit.”

He heard from constituents about crime and community safety as major concerns during his campaign. Kirton said underlying issues like addiction and poverty need to be addressed with housing first.

“You can spend 28 days in rehab if you’re an addict and if all you’re worrying about when you get out of that rehab  is where you’re going to stay warm tonight, I think those 28 days was a waste,” he said.

The Saskatoon Tribal Council’s downtown pilot project, Sawēyihotān, aimed at addressing homelessness and addiction excites Kirton in that regard.

People living in vulnerable circumstances, like at The Lighthouse, cannot just be picked up and moved out of downtown, Kirton said.

“That’s what some people want us to do: ‘just get them away from me’ and I hate that when I even hear that,” he said.