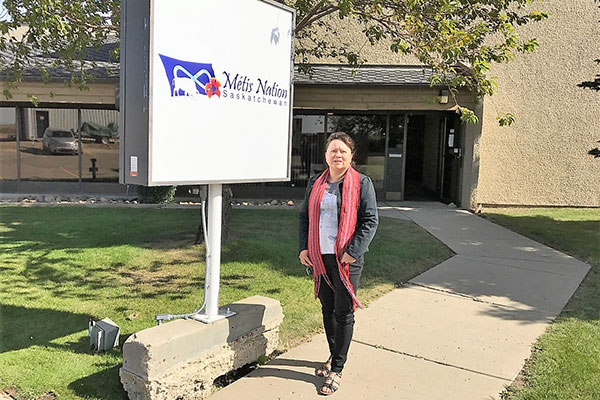 Mary Ann Morin, former Treasurer of the Métis Nation-Saskatchewan, in front of the head office in Saskatoon. NC Raine

On September 12, less than five months after being elected, Ms. Morin issued the following statement:

Ten days later, Ms. Morin issued a clarification, stating: “I have not Resigned from the Position of Treasurer (...) I will inform you that there is a motion in place (...) to accept the resignation of the Treasurer.”

On September 25, the MN-S issued a short statement confirming the resignation of Ms. Morin. Dispatches from the MN-S Executive Council to their membership and the public have been limited since the election in May.

“(Ms. Morin) had discussed with them that they needed to be accountable and transparent,” said Charlene Lavallee, President of the Les Femmes Michif, SK.

“The majority of the campaign that everyone ran on was accountability and transparency. That's overwhelmingly what the Métis people of Saskatchewan wanted. For them to make her resign on that does not look good for them,” she says.

According to Lavallee, Ms. Morin had discussed with the executive council the need to follow certain accounting practices, one of which was regarding a forensic audit of Batoche. The request caused upset, she says.

“Yes, for sure (they were resistant to being transparent),” says Lavallee.

Lavallee also says that in an off-camera Provincial Métis Council (PMC) meeting, MN-S Vice-President Gerald Morin accused Ms. Morin of failing to submit work plans to the government, a duty of which, says Lavallee, a treasurer is not responsible.

In a short conversation with Eagle Feather News, Ms. Morin stated she is seeking legal action, but could make no further statement.

Ms. Morin has also issued a formal letter to the Minsters of Indigenous and Northern Affairs regarding an alleged breach in Constitution Rights and Human Rights concerning email privacy and tampering by the Office of the MN-S.

Glen McCallum, President of the MN-S, did not respond to multiple requests for an interview.

“The MN-S suffers from a legitimacy crisis,” says Joe Garcea, Political Studies Professor at the University of Saskatchewan. “What leadership in the MN-S really requires is someone who is willing to acknowledge that legitimacy crisis and willing to figure out what to do about it. Someone who works towards building bridges rather than exploiting divisions.”

Further controversy has surrounded the alleged public and private manner of Vice-President Gerald Morin. In an open letter penned by Lavallee, she accuses Mr. Morin of verbal abuse during PMC meetings, directed primarily toward women.

“If it was a domestic relationship, he would be charged,” says Lavallee. “All you have to do is not agree with him and you become a victim. Or try to bring something to the table that he does not want to discuss.”

Another member, Daryle Desjarlais, issued an online statement condemning the behaviour of Mr. Morin, who allegedly did not allow a female area director to voice her opinion.

“She was not even given a chance to speak for our area. This is not acceptable,” writes Desjarlais. “For the pass (sic) 12 to 16 years our organization has been dealing with corruption and this new group is doing it again.”

Following the election, many Métis in Saskatchewan were hoping for positive change and transparency, but since have been disheartened, says Lavallee.

“I think most people are now of the realization that they aren't hearing anything because there's nothing good to report,” she says.

Prior to the May election, the MN-S had a troublesome history of internal divisions, infighting, and loss of federal funding due to failure to meet assembly requirements.

“They've been struggling with (these controversies) for many years. This is not new. And I think the question is – will it take years or will it take generations to get over this?” said Garcea.

Internal divisions, not just at the governmental level but at the community level as well, impede progression forward, says Garcea, and the challenge is to find consensus on what constitutes legitimate government and processes.

“I think it's important to remind existing and aspiring politicians and officials that you want to see the interests of the nation put ahead of the interests of any partial group or individual within that nation,” Garcea adds. “Start uniting us instead of dividing us.”