Perry Bellegarde was re-elected for a second term as the Assembly of First Nations (AFN) National Chief. 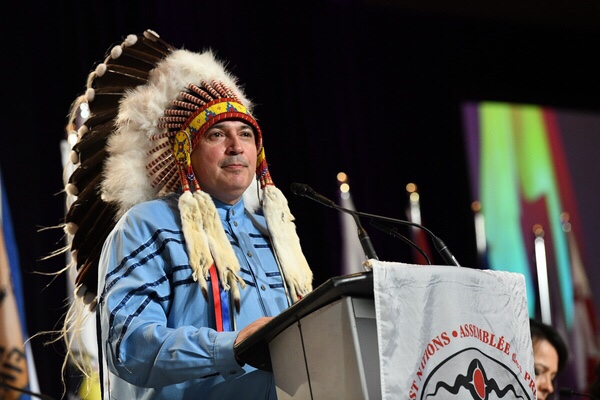 “I am humbled and honoured to receive a second mandate as National Chief of the Assembly of First Nations,” he said on a Facebook post. “Together we will continue to make meaningful progress for our people. We start today!”

Chief Bellegarde from the Little Black Bear First Nation, SK. was wrapped up in a starblanket and congratulated with a ceremonial song following the AFN election results, which was held during the AFN General Assembly in Vancouver, BC.

With 328 votes, Chief Bellegarde will serve a term for another three years. Sheila North had 125 votes, Miles Richardson had 59 votes and Russ Diabo had 10 votes.

“Thank you to those who put their names forward,” he said. “Your strength is strong and people from coast to coast recognized that.”

The Federation of Sovereign Indigenous Nations (FSIN) Executive offered their congratulations to Chief Bellegarde on being re-elected.

“We look forward to continuing our positive working relationship with National Chief Bellegarde,” said FSIN Chief Bobby Cameron in a media release. “There are a number of issues facing Saskatchewan First Nations communities and we are anticipating that Chief Bellegarde will continue his hard work in ensuring that the Treaty and Inherent Rights of First Nations people and communities in Saskatchewan are at the addressed at the national level. Congratulations to all of the candidates.”

Chief Bellegarde said the AFN achieved a lot in his first term. On September 2, 2015, the AFN released a document called ‘Closing the Gap: 2015 Federal Election Priorities for First Nations and Canada. The document includes compiled commitments with hopes of fulfilling for Indigenous people.

“In that document, we talked about the need to close the health and well-being gap between First Nations people and everybody else in Canada,” said Chief Bellegarde.

In his second term, he plans to establish an Indigenous Language Revitalization Act and hopes to have in place this fall. Chief Bellegarde said he is going to continue advocating for nation building, child welfare, justice for missing and murdered Indigenous women and girls and improving the quality of life for Indigenous people such as ending the boil water advisories which went from over 130 to 84 in his term as AFN National Chief.

“We’re not done yet,” he said. “[We’re] going to continue the momentum we’ve got going…it’s all about implementing rights and title, implementing treaty rights and getting them honoured according to their spirit and intent. That’s the work for this next term.”