A gathering which included Chief Tanya Aguilar-Antman and members of Grizzly Bear Head Lean Man, Office of the Treaty Commissioner Mary Culbertson, Mayor Ames Leslie of Battleford, a member of the local RCMP detachment and local citizens took place at Fort Battleford where eight warriors were hanged on November 27, 1885. In remembrance of this day the warriors were honoured with prayers, a warrior’s song, and a feast. 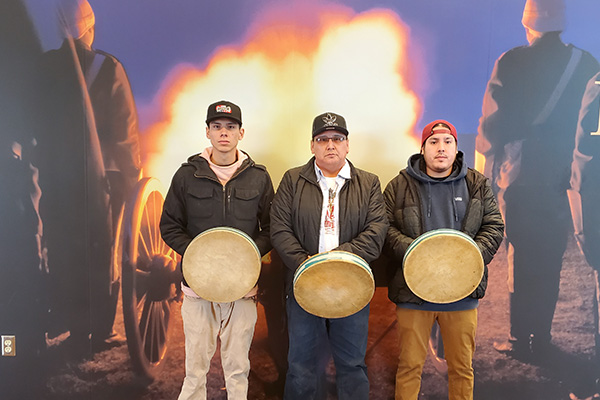 These three are descendants of late Art Moosimin (Ethan Night, Arnold Moosomin, Frankie Moosomin). They sang the warriors song that was sung before he was hanged. Photo by Morningstar

People reflected solemnly while a warrior’s song was sung by Arnold Moosomin and his sons Ethan Night-Moosomin and Frankie Moosomin. Moosomin talked about the day of the hangings and the two Nakoda warriors who chose to sing their songs rather than speak and shared that he was honoured to share the warrior’s song, he said,

“This particular song, I believe is one of the oldest songs that I know, it was fitting to sing this song for them, it is the most beautiful powerful song ever according to my ears and heart. This special song was destined to be sung for the spirit of the warriors. I just hope it did justice for them to be free spirits on the other side.”
Chief Aguilar Antman stated, “Today, November 27, 1885, eight warriors lives were taken, the largest mass hanging in Canada, we, Mosquito Grizzly Bear Head Lean Man the Assiniboine peoples lost 2 men on this day. Growing up in my community, I, Chief Aguilar Antiman (nee Stone) heard my elders speak of this sad dark history and tragedy. The old people would share that each of the 8 men were asked if they wanted to say anything and it was the two Assiniboine warriors who sang a song before they were hung. After 134 years, this song is still sung in Mosquito Grizzly Bear Head Lean Man. I am so proud of the families and my community for keeping this song and the history alive. This song is a gift from our heroic warriors. Today, it was an emotional ceremony, a realization that the time is now, for Mosquito Grizzly Bear Head Lean Man to tell our side of the story. All 8 warriors will not be forgotten, imagine all their lives taken for fighting for survival for their own people.”

According to a Facebook Post from the late Tyrone Tootoosis the warriors who were hanged were; Wandering Spirit, Round the Sky, Bad Arrow, Miserable Man, Iron Body, Little Bear, Itka and Charles Ducharme.