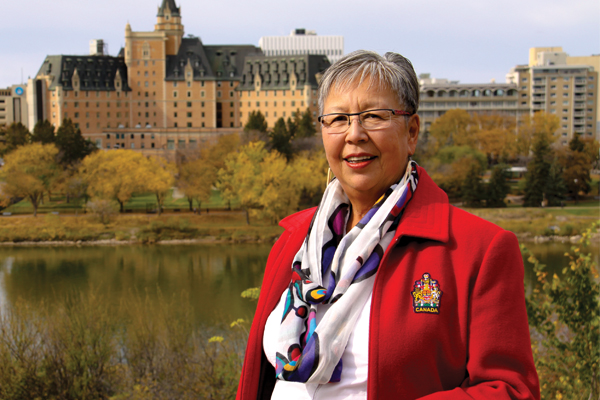 Senator Lillian Dyck was 36 when she completed her PhD in neurochemistry and determined it was time to reveal her Cree identity.

She was same age then as her mother was when she died.

“I said, ‘Okay. Now I have my PhD. I have earned the highest possible degree. Now I can admit that I’m an Indian and no one can look down on me,” Dyck said in a recent interview.

Her mother, Eva McNab of George Gordon First Nation, had lost her Indian status when she married Quon Yok Leen in 1942.

“Mom did not want us to identify as Indian. Absolutely not. It was a big shame. If we did, it would just be big trouble for us. On her deathbed, it became very clear. ‘Don’t tell anybody you’re Indian and don’t ever go back to the reserve.’”

Dyck retired this fall from the Senate of Canada, where she had served since 2005, after a career as a professor and associate dean at the University of Saskatchewan.
She proudly served as the first female First Nations Senator and the first Canadian-born Chinese Senator. She fought for an inquiry into missing and murdered

Indigenous women and against harassment of Indigenous and female senators and MPs by other politicians.

Her greatest satisfactions were in successfully attacking sexism in the Indian Act that stripped Indigenous women of their status when they married non-First Nations men and pushing through an amendment to the Criminal Code that now makes violence against Indigenous women an aggravating factor in sentencing.
FSIN vice chief Heather Bear has said Dyck, “has changed the landscape for Canada’s Indigenous women.”

Dyck’s mother, Eva McNab, went to the Indian Residential School at Gordon’s and one in Manitoba after that one burned down. She had rheumatic fever when she was a child, which later factored in her early death from heart failure, when Lillian was 10.

After residential school, Eva and her sister, Carrie, left the reserve, where intergenerational trauma from residential school and other Indian Act policies was manifesting in poverty, alcoholism and sexual abuse.

Eva never talked about her childhood but Lillian believes her mother’s determination to leave her Cree identity behind was rooted in the residential school legacy.

For women in those days, “their key to a good life was a good marriage,” Dyck said.
Her father, “was a handsome young man and a café owner, so he was a darned good catch.”

Quon had come to Canada at age 14 in 1912, to work and send money home. He had returned to China for visits and while there, had married and had two children.
He was unable to bring his family to join him because Canada banned Chinese immigration from 1923 to 1947. His wife was killed during the Japanese invasion of China in the 1930s and the family was scattered.

Quon and McNab were introduced by Carrie, who had married a Chinese man who owned a restaurant.

Dyck and her brother, Winston, were the only Chinese students in the school in North Battleford and other small towns where they lived.

Her father also died young, when she was in grade 12. She realized she’d never thought to ask him about his childhood or their Chinese relations.

“Because it’s such a mystery, their life, and the things that happened to them has been the guiding story of what I do, what I’ve done in the Senate, to get to the root of the discrimination, to realize the Indian residential schools were so terribly bad (and) my dad had to pay a head tax. He couldn’t bring his family from China.”

At 36, Dyck replied to a Christmas card from a cousin and visited the reserve for the first time since childhood. She met her uncle Hilliard McNab, who by then had been the chief for many years. He told her she looked like her mother. He wept to have her home.

“It was very emotional,” she said.

Soon she began to meet her many cousins. After a lifetime without any relations, it was overwhelming to discover that she was related to most of the people at Gordon’s.

She was married, has a son, Nathan, and is divorced.

In her work life at the university, she was dealing with a bully on the job and began seeing a counselor.

“I was trying to sort out who I was…  I had to sort of dig at that and address the shame that I had inherited.

“It was shame that I felt of being an Indian and a woman that was holding me back and making me vulnerable.”

She sought out Indigenous women who guided her healing journey and introduced her to sweats and other ceremony. She says she found her voice. She stood up for students and women who were treated unfairly at the university and found some allies among the faculty.

Dyck doesn’t blame her mother for doing what she thought was best for herself and her children.

“I thank my mom for leaving the reserve; if we had lived there, I and my brother would have had to attend residential school. She saved us from that abuse and a poorer quality of education. We were lucky that we ended up in Swift Current, which had an excellent high school… We suffered racism, bad, but not as bad as what was happening in residential schools,” she says.

In 2005 Paul Martin appointed her to the Senate.

“It was so good to become a senator because… most of my life I’d been silenced… Suddenly I had the ability to voice, to be able to speak… because I didn’t have a boss.”

Many of her early speeches were about reclaiming identity, “all those things I should’ve had or could’ve had,” she said.

“Who I am as person has determined my work in the Senate because I’ve focused on the Chinese Canadian issues (and) Indigenous women’s rights.

“Here in Canada, someone like me could become a senator and change the laws that discriminated against people like my own family…. It’s so incredible. They would never have believed it. I have no words for it,” Dyck said.

Next, Dyck will have her Senate and public speeches printed and bound for her own library and will keep a digitized copy to share if there are requests.

She is also thinking of writing a book about the inside story of the push to amend the Criminal Code in her final months in the Senate.

She will also take some time to enjoy the freedom to watch and photograph the birds.