Every year, the Saskatchewan Indigenous Cultural Centre (SICC) puts together a summit of languages – inviting communities and speakers of Indigenous languages worldwide to share knowledge on keeping languages alive. In it’s 14th year, the 2019 SICC ‘Language Keepers Gathering’ has had its largest gathering to date, with around 700 attendees from around the globe. 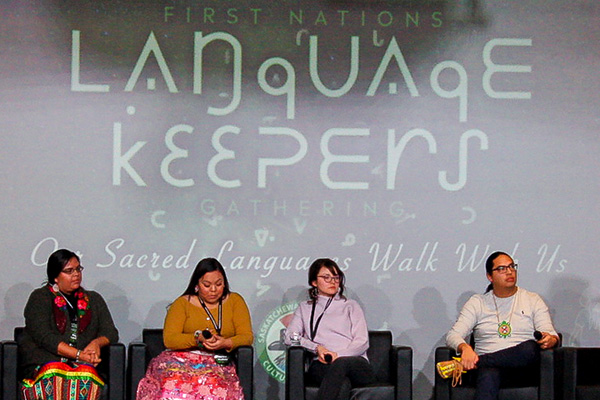 “It shows that there’s such a thirst for what we’re doing. So many people who want to revitalize their language but don’t know how. They need that encouragement and support,” SICC President Wanda Wilson told Eagle Feather News.

One of the main objectives of the gathering was to highlight how people are using innovative language learning methodologies in their homes, schools and throughout their communities, even those who might be doing it as the sole speaker in their community.

“It’s all about inspiration,” said Wilson. “Because when you go out there and do that work, it’s not easy. People are sometimes the only speaker in their community, then they meet 50 people here who are also the only speakers in their (respective) communities, and they think ‘okay, I can do this.’”

Wilson said that a province with vitalized Indigenous languages would address many of systemic issues in Saskatchewan communities.

“It would start bringing our families back together. I truly believe we wouldn’t have as many problems with addictions, violence, children being taken from their families,” she said. “When you have your language and your culture and you’re connected to the land, you don’t have the need for all that other stuff.”

This year’s Gathering was also special as 2019 has been declared by the United Nations as the International Year of Indigenous Languages. As such, SICC ensured they included international perspective, said Wilson.

Dr. Carwyn Jones, a New Zealander Māori of Ngati Kahungunu descent, and senior lecturer at the Faculty of Law at Victoria University of Wellington, spoke on Māori law and legal traditions, and discussed ways that law can be drawn from Māori stories - which are deeply connected with place and identity.

Also featured in this year’s gathering was a youth panel – four young people, Hal Cameron, Jordan Klein-Cheecham, Shay McArthur, and Kaylene Waditaka, all shared their journey with Indigenous language and why language is important to them.

“In Dene, when a baby is born, we don’t say ‘she gave birth’, or ‘that child was born’. We say, ‘that baby has arrived on Earth.’ Just in those words, there are so many teachings and ideologies,” said Klein-Cheecham, who is from La Loche. “You have a spirit and you came from the spirit world to this earth. That has implications on how we view the earth and how we spend our time here.”

Hal Cameron, from Beardy’s & Okemasis First Nation, spoke passionately about how essential language is in his life.

“Language isn’t something external that I’m trying to protect. Why is breathing important? It’s part of me, it’s something I can’t disconnect,” he said. “That little language flame within us, even though we may not speak it fluently yet, that flame will never go out. That’s how spiritual our language is.”