Many kids dream of nothing more than a shiny new bike, but sometimes for financial reasons parents are unable to buy a new one.

Those at the Indigenous Christian Fellowship in Regina want to change this with their Bicycle Distribution Day.

This started in 1999 because they noticed a need for it, said Bert Adema Executive Director of Indigenous Christian Fellowship. 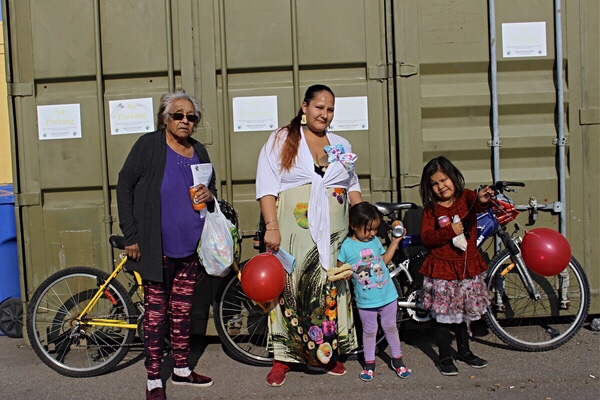 For Florance Vivier, Cassandra Outhwaite, Karalynn Outhwaite and Sage Kequahtooway, Bicycle Distribution Day at Indigenous Christian Fellowship was a way for the family to get new bikes when they would otherwise not have been able to. Photo by Kaitlynn Nordal

“It was apparent kids could use bikes and we had a volunteer who liked working on bikes,” he said. “So, it was putting the need of the kids in the community who needed bikes, volunteers with bike repair capacity, and people with bikes willing to give them away. Our job was just putting those pieces together and we’ve carried on ever since.”

Adema is thankful to the volunteers and to those who donate their old bikes.

“It means that people who might not otherwise have a bike are going to get a bike. Children are getting a basic lock and a helmet, and they are riding away,” said Adema. “They have wheels for the summer and have fun riding around because of the generosity of donors and volunteers who are volunteering their time to fix bikes. So, it’s a major blessing.”

Adema also believes it is important to keep the day going simply to help the community.

“I think it’s good to bless the community. People are called to be good to each other, that’s what the creator asked us to do,” he said. “Some of these bikes would be in landfill sites so it’s much better somebody is using the bike than be stuck in someone backyard or be dumped in a landfill or just recycled for metal. It’s a good way to continue recycling resources through recycling bikes.”

This is such an important event that Bicycle Distribution Day usually happens a few times a year. Before it started at 4:00 p.m., people were lined up around the corner and down the street.

Single mother Cassandra Outhwaite, who was there with her auntie Florence Vivier and daughters Sage Kequahtooway and Karalynn Outhwaite, was happy a day like this exists.

“My kids…needed a bike. I also needed one for myself to get back and forth for my medication,” said Outhwaite, who is thankful they were in line on time. “It means the world now that I got a bike for my kids. My kids are happy because they have bikes.”

Her daughter Sage was happy and thankful to have a new bike since the tire on her other one broke and she was unable to ride it. She is now looking forward to ride her bike to Candy Cane Park.

The Indigenous Christian Fellowship usually waits until there are around 75 to 100 bikes to give away and then they organize a distribution day once all the bikes are fixed up.

Since starting in 1999, the Indigenous Christian Fellowship had officially given away 4,184 bikes as of August 2018. You can add another 51 that were given away this spring.