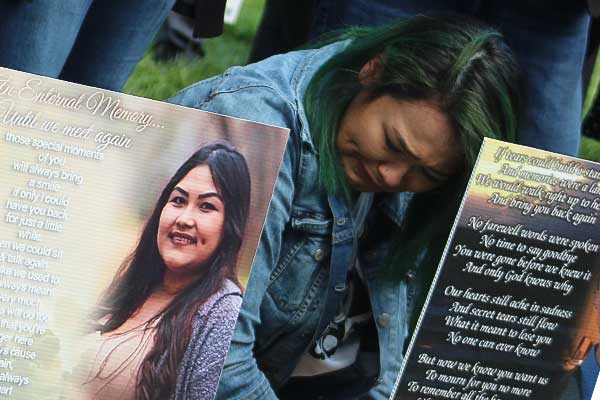 Youth and community members of Fond Du Lac in northern Saskatchewan stand by photos of their loved ones lost to suicide. Fond Du Lac chief Louie Mercredi addressed the ongoing issue of suicide in the north and expressed the need for long-term solutions. Phot by Jeanelle Mandes

The Federation of Sovereign Indigenous Nations (FSIN) plans to draft legislation addressing suicide prevention in Saskatchewan to give to the provincial and federal governments.

“It’s something that we have been working on for quite some time. It’s still in its early stages, however, it’s very inclusive. We are getting feedback and most importantly, direction and recommendations right at the First Nations level,” he said at a news conference August 11 at the legislature grounds in Regina, where activist Tristan Duroucher set up a teepee camp on July 31, following a 28-day walk from Air Ronge to Regina to protest the Saskatchewan government’s defeat of an opposition sponsored suicide prevention bill earlier this year.

Durocher began a fast he says he’ll continue until October 14 in an action he calls the Walking Out of Darkness Project.

Many chiefs and leaders from throughout Saskatchewan were present to talk about the problem of Indigenous suicides in the province and support Durocher’s call for suicide prevention legislation.

Chief Louis Mercredi of Fond du Lac Denesuline Nation, the northern-most community in Saskatchewan, said suicide is a serious problem among the 900 people who live there.

“We’re dealing with COVID pandemic and a suicide pandemic. Everyone here with me has dealt with the traumas of suicide,” he said, referring to grieving community members who joined him at the event.

Photos of their loved ones stood in front of a few youths who shed tears as they listened to their community leader speak on their behalf.

Mercredi said it’s been 40 years since they experienced their first suicide in the north and numbers have been climbing ever since.

“When we’re faced with traumas, everyone wants to help, all levels of government. But there is no long-term solution for our people. We don’t have the tools, we don’t have the funds to save our people,” he said.

Traumas such as Fond Du Lac’s are fueling FSIN to create a suicide prevention bill.

“We need to see better, positive results,” said Chief Cameron. “We’re still hearing from families on what’s going to work so we can have this legislation supported by both federal and provincial governments, we hope. We hope that word ‘reconciliation’ isn’t just words. We need action. And that’s action (on) reconciliation (by) listening and taking direction from our First Nations.”

Chief Cameron hopes to have the bill ready to present by early 2021.

Assembly of First Nations National Chief Perry Bellegarde was there to add his voice to those of Saskatchewan First Nations calling for meaningful provincial and federal legislation.

“It’s up to us now as AFN, FSIN, tribal councils and treaty areas to put pressure on the decision-making peoples in this house (Legislative Building) and the House in Ottawa so legislation (will be put) in place to adequately deal with this crisis,” said Chief Bellegarde.