As an innovative way to raise the profile and awareness of Missing and Murdered Indigenous Women, Girls, and Two-Spirit (MMIWG2S) an organization in Saskatoon are sending Faceless Dolls to the Canadian Senate. 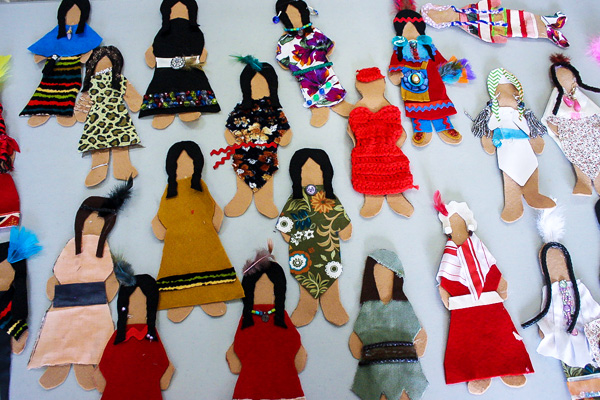 Some of the dolls made in Saskatoon to be sent to Ottawa.

“We want people to care, to be kind, and to acknowledge the women and girls that are still missing,” said Beverly Fullerton, Integration Worker at the Elizabeth Fry Society of Saskatchewan. “We want to show that we haven’t forgotten them.”

The Elizabeth Fry Society, on November 20, 2019, invited the community to help them make 105 Faceless Dolls – one for every office of a senator in Ottawa. The Faceless Dolls are part of the Native Women's Association of Canada (NWAC) project started in 2012 to raise awareness to the epidemic of the more than 600 missing and murdered women and girls in Canada.

“We don’t want this to be swept under the rug,” said Fullerton. “We have sister, aunts, mothers, daughters that are missing out there. If they’re being remembered by a Faceless Doll, then let’s get as many dolls out there as we can.”

The initiative to send the dolls to Ottawa was sparked by a meeting between the Elizabeth Fry Society and Senator Kim Pate, who has a history of advocacy for Indigenous and incarcerated women.

“We thought that it was a big thing, coming from the Senator, so we wanted to continue to be a part of bringing awareness to (MMIWG2S),” said Fullerton. “We thought it would be great, being from small Saskatoon over here, to help by sending these dolls to Ottawa.”

The dolls, of which no two are the same, help to give a voice and increased visual presence to the missing and murdered women a girls, said Fullerton. The dolls are faceless to reflect society’s ‘devaluing’ of Indigenous women and girls.

The dolls made were a result of a diverse group of participants from the Saskatoon community, including the Aboriginal Friendship Centre of Saskatchewan, women from half-way houses, Elizabeth Fry Society clients, families from the surrounding core area, and elders.

The Elizabeth Fry Society is the only organization in Saskatchewan that works with women incarcerated and involved with the justice system. Of the women they work with, 90% are Indigenous.

“We fight for their rights, we fight for resources, we advocate,” said Fullerton. “We work really hard to ensure the women we're working with do not become another number that is missing.”