For most young people today, it may not seem special to have your own stuffed-animal or doll. But for those who grew up in residential schools, having a doll of your own was a rare comfort, even if you had to make it on your own. 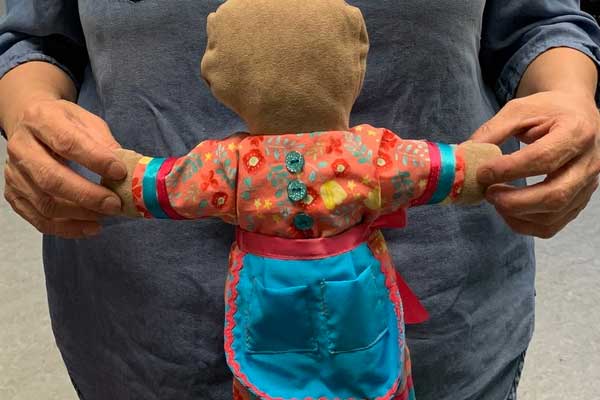 Emilia Villebrun, member of the Saskatoon Survivor's Cirlce, holds the doll that her grandson will gift to his other ko-kum.

“We thought we would like to make dolls because we all have children or grandchildren to share them with,” said Lorna Arcand, Coordinator of the Saskatoon Survivor's Circle.

“The dolls don't have faces because they could be anyone or anything. They're not perfect, but neither are any of us,” she said.

In residential schools, young girls were rarely given dolls, explained Arcand, so they would often make their own dolls from whatever available materials they could find. Continuing the tradition to make dolls therefore provides healing, said Arcand.

“It's about getting together, intermingling in the community, and finding a niche that allows you to spread your wings, but it's also about healing. Everyone has suffered on their own for years, so now they're ready to come together and create something positive,” said Arcand.

The Saskatoon Survivor's Circle, which has been together for about four years, has been involved in everything from bearing witness at the Wicihitowin Indigenous Engagement Conference to speaking at the Aboriginal Track and Field Championships. The group has had a transformational experience on its members, said Arcand.

“Every single one of them has changed as a result of being in this group,” she said. “After residential school, it's hard for so many survivors to get back in your own community. You've been gone so long that no one knew you. So now they're in the city and trying to get back some of that culture they lost while in the school.”

And there's even teachings and culture in the dolls themselves. The children or grandchildren who receive the dolls will be taught to care for it in a traditional parenting manner – ensuring it's clean and cared for as one would a baby.

“There's magic in these dolls,” said Emilia Villebrun, member of the group, whose mother was a survivor. “The ku-kum dolls are very important because they are a way of life, they are a teaching toll. My mom used to use dolls as an example when teaching me.”

For Villebrun, the doll she made will find it's way to a special person. Her grandson requested he give the doll to his other ko-kum, which Villebrun said will go a long way in building a relationship and respect.

“The healing power that comes with these dolls is huge,” she said.

The feeling is consistent the impact that Saskatoon Survivor's Circle seems to have on all it's members.

“This is a way of life that is lost now. But you can feel it in this room, you can feel the positive environment,” said Villebrun. “On a healing level, it's really important to be part of it.”