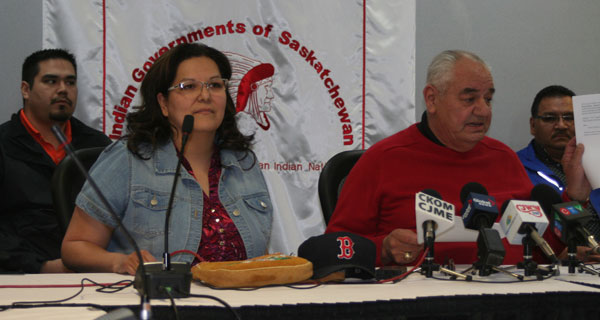 FSIN Vice Chief Kimberly Jonathan and FSIN Senator Ted Quewezance address the media about the state of crisis on the Keeseekoose, Cote, and Key First Nations.

The Saulteaux Pelly Agency Chiefs Health Alliance of Keeseekoose, Cote, and Key First Nation declared their communities in a major state of crisis March 14th, 2016 at a Federation of Saskatchewan Indian Nations (FSIN) press conference. Located a few miles north of Kamsack, the three First Nations have been plagued by hundreds of deaths they attribute to addictions, violence, and health problems, and note they are not alone. FSIN Senator Ted Quewezance has attended more than 400 funerals in the past year.

“Imagine going to a funeral every week, let alone three or four a week. There were four deaths in one day.”

“It’s happening in 74 communities in Saskatchewan and 600 other communities across Canada,” noted Quewezance of the widespread disparity in health and wellness for First Nations, criticizing both the federal and provincial governments who play jurisdictional football with the issue and send poorly conceived band-aid solutions in the form of literature and education, rather than providing equitable primary care. “National harm reductions don’t help; pamphlets don’t heal our people.”

“We are in a crisis; we need help and we need it now,” said Cote First Nation Chief Norman Whitehawk. “Our communities are in a constant state of grieving.”

“We need adequate resources to help our families deal with the emotional toll this crisis is having on them,” added Keesekoose Chief Lyndon Musqua.

Quewezance notes that many of the deaths and addictions issues in the Saulteaux Pelly Agency area are attributed to the faulty methadone program at work, being dispensed by the two Kamsack pharmacies and the doctor at Kamsack, all three of whom they have asked to be reviewed. In a Health Canada Report written by Dr. John Elias, a Health Canada consultant, he reports that many of the addictions problems escalated with the establishment of the methadone clinic.

“The Federal and Provincial Government have become the pushers of drugs as they fund narcotics and opioids under the government drug plans,” said Quewezance. “They track prescription drug use and abuse but do nothing to stop the problem.”

The issue boils down to basic healthcare inequity: despite MediCare being established for mainstream Canadians from the Treaty Six wording “a medicine chest for times of sickness” this promise remains unfulfilled to the First Nations it was promised, while being made accessible for all other Canadians. Vice-Chief Kimberley Jonathan emphasized at the press conference that systemic barriers are in place: medical transportation and access to basic medical needs and mental health services remain huge issues for many of the remote and northern communities, as evidenced by the tragedy at La Loche.

“You can talk about the crisis, you can talk about state of emergencies across the country, but if you haven’t got a solution, it isn’t going to happen,” noted Quewezance, requesting that the governments sit down at the table until a solution is reached whereby Health Canada and the Province are taking responsibility for providing essential primary care services on-reserve that will have a positive effect on health outcomes. “There’s no reason we shouldn’t have doctors on every First Nation, we have the health centres.”

“It’s systemic racism — people are literally dying,” noted Jonathan. “These are human beings and ought to be respected and given the positive support other people enjoy.

“The ultimate goal is capacity building to be able to provide the capacity, the resources, the support, in communities and cities. The responsibility doesn’t just lie with the chiefs, with the council, with the community members, the responsibility lies with all of us to be treated equally.”

SUMA, SARM, the cities, and the medical industry all need to step up and be voices for those who are dying needlessly in this state of crisis.

“The greatest priority ought to be those who are vulnerable,”  noted Jonathan.

Quewezance gave an overview of the past 27 months of negotiations, including two health nurses, only one of whom has now been hired, and a treatment facility which Health Canada agreed to fund 1.1 million but the provincial government backed away from a $350 000 commitment.

“There’s racism, there’s bias, and a lack of understanding of First Nations people within our health regions,” noted Quewezance. “They receive over two and a half million dollars to look after health care in our region.”

Quewezance lost his son in November, after visiting four different hospitals, one in Kamsack, one in Yorkton, and two in Saskatoon. He was diagnosed with swelling of the brain in Yorkton but treated for liver issues until he died of meningitis in Saskatoon.

There is an awareness in the medical system that further engagement and support needs to be undertaken for First Nations health issues. This summer the Canadian Medical Association Conference is taking one day of their conference to focus solely on First Nations.

“It’s time for equality,” said Quewezance. “We want the attention of the federal government, the provincial government, and the health care system. We meet with them regularly but solutions cost money.”

They have written a letter to the Prime Minister and the Minister of Health asking for equal care, equal quality, and equal health-outcomes comparable to mainstream Canadian healthcare in a measurable, timely, and reasonable way. This includes relationship-based patient-centred care that is culturally safe; and meaningful participation by First Nations in defining health care problems and implementing health care solutions.