It was a book launch, but also a bit of a reunion as the four editors who started together at the University of Saskatchewan returned to celebrate five years of work on an Indigenous health resource. 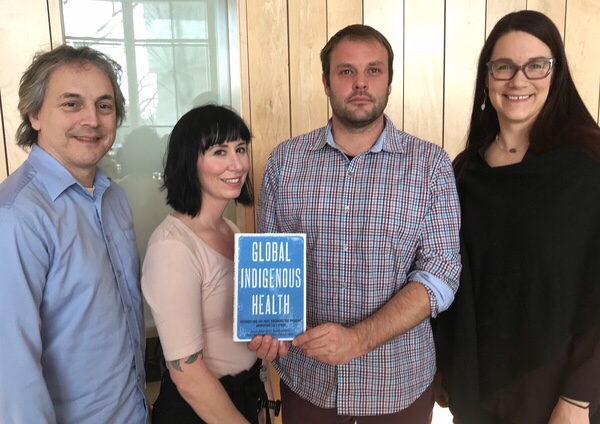 More than 30 people gathered at the Gordon Oakes Red Bear Student Centre on campus Friday afternoon for the event.

Editors Robert Henry, Amanda LaVallee, Nancy Van Styvendale, Robert Innes, were joined by some of the book’s contributors to present Global Indigenous Health: Reconciling the Past, Engaging the Present, Animating the Future.

The project started in 2013 to showcase the incredible work being done on Indigenous health by academics, as well as community researchers and knowledge keepers.

We wanted to “make sure what was coming forth is what they wanted to come forth,” said LaVallee.

“Something like this hasn’t been done here. This is one of the first collections globally focusing on Indigenous health,” Henry said.

“We know there has been a real disconnect between Indigenous peoples and wellbeing and health.”

Global Indigenous Health looks at more than health in a biomedical sense. The book looks at health holistically.

“This is where the title of the book came through where we are looking at the past, understanding the present to reimagine a future together,” Henry said

The book is divided into four parts, with the first piece focusing on ethics and historical understanding. The second looks at environmental and ecological health, including connection to land and food, said LaVallee.

In the third section the impacts of colonial violence and Indigenous kinship are discussed with a focus on the importance of women and children, and the impact of intergenerational trauma, she said. The final part looks towards the future of Indigenous knowledge and health activism.

At the launch, contributors Barbara Fornssler, Colleen Anne Dell, and Peter Butt spoke about their chapter in that final section. It focuses on mentorship and building relationships in health research.

One of the biggest challenges for non-Indigenous researchers engaging in Indigenous health work is stepping back and acting as a support, said Butt. The first part is being present and the second step is being an ally.

“One is much more imbedded in talking the hits, removing barriers and then getting out of the way,” he said, adding non-Indigenous researchers need to be comfortable shifting back and forth between an active and passive role.

“We can push systems and allow for change to happen in them,” said Dell. Dell spoke about seeking change in how a grant was given to meet the needs of the research and not the other way around.

A chapter about ethics and child welfare looks at the impact of the child welfare system through collective histories. It is co-authored by Caroline Tait and the collection editor Henry.

“We wanted to do something with the collection that went beyond biomedical and to show that wellness and wellbeing is a holistic piece,” Henry said. “We can’t understand Indigenous health in isolation.”