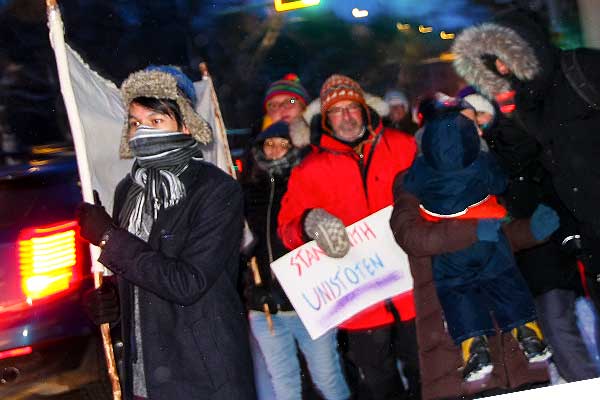 Protesters in Regina braved the -37 degree wind chill as they took to the Albert Memorial Bridge on Monday night to call for solidarity with the Wet’suwet’en land defenders at the Unist’ot’en and Gidimt’en Camps in northern British Columbia. The protestors at the Camps and across Canada oppose construction on the Coastal GasLink (CGL) pipeline that is planned to run through traditional and unceded Wet’suwet’en territory.

Wendy Lynn Lerat, a lecturer at First Nations University of Canada, spoke at the protest.

The protest on January 13, which attracted about 30 people, was one of over 40 actions that took place across North America last week in response to the land defenders’ call for a week of solidarity.

Although the B.C. Supreme Court issued an injunction last week ordering land defenders to clear the way for CGL workers, all five Wet’suwet’en clans continue to unanimously stand against the pipeline.

The RCMP, who has set up a checkpoint restricting access to the Camp, issued a press release Monday evening explaining their decision.

“Our duty is to preserve the safety of everyone involved in this dispute, and to prevent further contraventions to the BC Supreme Court ordered injunction,” said Director in charge of communication services Dawn Roberts. “As a result, an access control checkpoint has been established at the 27-kilometer mark of the forestry road.”

Saima Desai, one of the co-organizers of Monday night’s protest in Regina, says she is prepared to protest again next week if necessary.

“We’re all hoping for a swift and peaceful resolution of this issue,” she said. “We’re all hoping for the RCMP to back off of unceded Indigenous lands and for CGL to recognize that they can’t force a pipeline through Indigenous lands without consent. However, … if things do continue to escalate, and solidarity continues to be needed in a week and on-the-ground organizers have capacity, we might just have to brave the cold again and have another protest.”

Representatives of the Unist’ot’en and Gidimt’en Camps and CGL could not be reached for comment by Wednesday.