A March and Rally occurred in Regina to demand an end to the forced sterilization of Indigenous women and girls. The event was led and supported by Semaganis Worme Lombard (SWL) and the proposed representative plaintiffs on November 26, 2019.

SWL represents three proposed representative plaintiffs in the M.R.L.P., S.A.T. and D.D.S. v The Attorney General of Canada et al in Saskatchewan, as well as SDP and PDI v Canada et al in Manitoba. On November 26, 2019, the proposed representative plaintiffs organized a march and rally to draw attention to and demand an end to the forced sterilization of Indigenous women and girls. 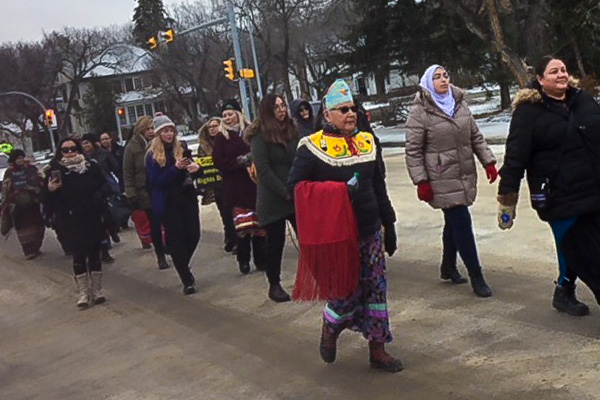 “We wanted to bring public awareness of the fact that in December 2018, it’s still happening by coerced and forced sterilization. Women are being sterilized without full and prior consent,” said Helen Semaganis, the managing law partner with SWL. “There’s often misinformation that she could have this procedure reversed and that is not correct.”

Due to a publication ban that was issued by order of the Court on October 5, 2017, media is prohibited from publishing any information or images that could result in an identification of the proposed representative plaintiffs and their families.

The event kicked off with a pipe ceremony and prayer in the atrium of the First Nations University of Canada (FNUniv) with a march to the Legislative Building that followed where Buffalo Lodge singers drummed and sang along the way with the walkers.

“They all spoke and gave their support. We all spoke and delivered the same message,” said Semaganis. “This kind of activity needs to stop now and the [provincial government] needs to take some measure of action like policy action to ensure that their medical professionals and institutions performing the sterilizations procedures against our Indigenous women.”

A minister from the provincial government and several MLA opposition leaders were present at the rally. There were over 15 people marching and over 50 people who attended the rally.

Semaganis hopes this event creates a level of awareness to women on what consent means when it comes to a medical procedure that has huge implications that sterilization does.

“[I hope] the government listens and takes direct action to ensure that another woman does not go through this,” she said. “Women to know they can say no to these doctors who want to perform [the sterilization procedures] to them.”

SWL represents over one hundred victims of forced and coerced sterilization in Canada in the context of the proposed class actions we are advancing in Saskatchewan, Manitoba and other provinces.