Adam McInnes, a biomedical engineering student at the University of Saskatchewan (U of S), is being recognized for research that could one day impact millions of lives.

McInnes, a Metis student, was recently awarded the prestigious Vanier Canada Graduate Scholarship, $150,000 over three years, for demonstrating excellence in research at a Canadian university. His research is looking at promoting tissue growth for 3D printing of artificial organs that may be used for transplants. 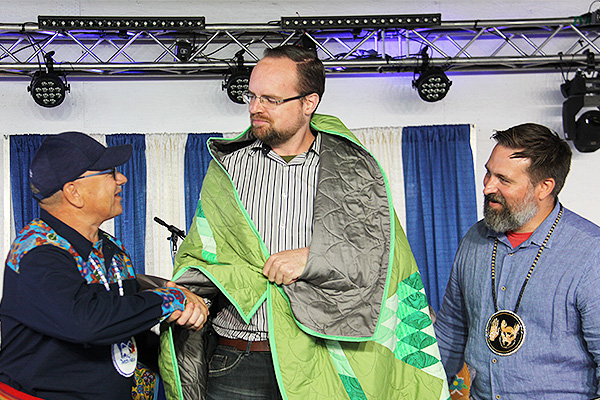 Dr.Adam McInnes was honoured with a blanket thissummer at Back to Batoche by MN-S President Glen McCallum and Richard Quintal, the CEO of the MN-S Secretariat. He was awarded a Vanier Canada Graduate Scholarship earlier this year for his research into promoting tissue growth for use in 3D printing of artificial organs. EFN Staff

“I don’t know if it’s really sunk in yet, to be honest,” McInnes said about receiving the Vanier. “It was quite a shock, a good shock.”

More specifically, McInnes is looking at two different proteins that the body finds favourable to work with, and putting them together. He hopes, by putting them together, they will compliment each other’s strengths and reduce the drawbacks – creating a protein that will degrade slower and have improved biocompatibility. His PhD research will focus on printing this protein into a scaffold that he can then attempt to grow tissues with.

“It sounds complicated, but to me it’s rather straightforward,” he laughs.

The kernel to work in tissue engineering was planted at a young age, he said, about 13 or 14, when he saw a program about the Vacanti mouse (aka ear mouse), a laboratory mouse which appeared to have a human ear on its back. It was an early proof of concept that showed McInnes what the possibilities were in science.

Now McInnes is working towards making a significant contribution to regenerative medicine, which has the potential to be a multi-billion-dollar industry.

“This larger field (of regenerative medicine) is going to revolutionize how we practice medicine. It looks at how we rejuvenate, repair, or even replace damaged tissues in the body,” he said. “It can get into organ transplantation, hypothetically being able to grow a liver or kidney (...) that's the eventual hope.”

McInnes also said several other applications are possible, including in pharmaceutical research for developing and testing new drugs.

“If this works, we can get a better understanding during the early phases of these tests, and hopefully help the drug development process.”

When he’s not working to revolutionize contemporary medicine, McInnes is involved with the Metis Nation-Saskatchewan (MN-S) as the President of the Metis Local 126. Some of their current efforts include applying for different academic grants, a housing grant for Metis people in Saskatoon, and starting a 4H club to teach Metis culture to kids.

“I didn’t grow up around that culture or community, so I’m trying to learn more about my culture, who I am, and where I belong within the Metis community,” he said. “Not just as a scientist, but as a human being, I think I have an obligation to be a role model and help the next generation.”