Métis woman honoured for years of community service, particularly for those living with HIV/AIDS

Lorraine Stewart was recently recognized for her decades of work in the community, specifically by CUMFI (Central Urban Metis Federation Inc.) and PLWA (Persons Living with AIDS Network of Saskatchewan).

“We are gathered here today to honour Lorraine’s work,” noted her grand-daughter Kelly. “Family has always been her number one priority.” 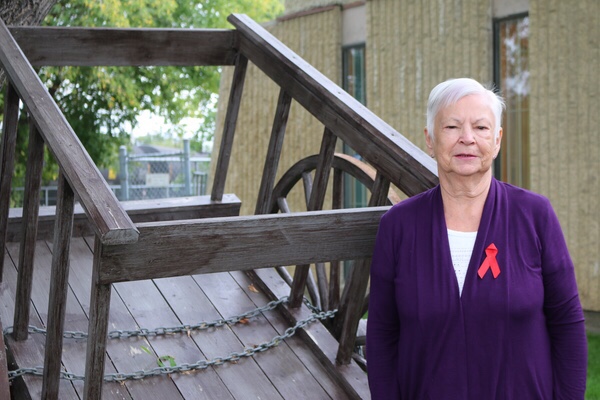 Lorraine Steward has put many hours into supporting not only her family but the entire community. “You have to make the most of what life gives you. Just keep one foot in front of the other and keep positive,” she says.

But alongside raising her own family, Stewart worked tirelessly in the community as well. She worked with City of Saskatoon Race Relations in the early 1970’s, and was involved with organizations such as Native Outreach, Saskatoon Food Bank Executive Director, and past president of PLWA where she continues on as a volunteer and board member.

A mother of 8 and eldest daughter of 9, she lost her youngest son Donald to HIV/AIDS and that inspired her to continue to advocate for a better quality of life for others. Stewart House, a house for moms living with HIV, is named for her. She has been recognized with awards such as the Golden Jubilee and Canada 125 medals.

Shirley Isbister of CUMFI thanked her and noted this mother, grandmother, and great-great-grandmother was still making a difference to people around her.

“Thirty-seven years is a long time to stay in this community,” noted Isbister, calling Stewart “a lifer” dedicated to others. “I know this is just one stop on your journey and now Creator has a new path for you to move forward and still be in the community and with your family.”

Her dedication, commitment, and continued advocacy were also praised. Born in Saskatoon in 1933 to Lawrence and Verna Pritchard, founding members of the Métis society, she married Bill, a Korean war veteran, in her late teens and continued the Pritchard family example of activism and advocacy for others.

Stewart thanked everyone, noting that beyond being a wife, mother, grandmother to great-great-grandmother, and supported by family in everything she’s done, many people from the community have also been supportive in this work near and dear to her heart. Some members of the HIV advocacy committee presented her with a giant card signed by dozens of individuals. They said they considered her family, joking not only is she a mother and grandmother figure they love, but she also has earned her no-nonsense nickname, “The Warden” for her take-no-prisoners approach to getting jobs done.

Advocating for prevention as well as a good quality of life and wellness for those already diagnosed with HIV, Stewart only stepped down as President and Chief Executive Officer this past June. She continues her involvement with the board and as a volunteer.

“I hope this work has done as much for everyone else as this work has done for me,” said Stewart after the luncheon, held at the CUMFI offices, offering her philosophy when asked if she had any thoughts to share. “You have to make the most of what life gives you. Just keep one foot in front of the other and keep positive.”