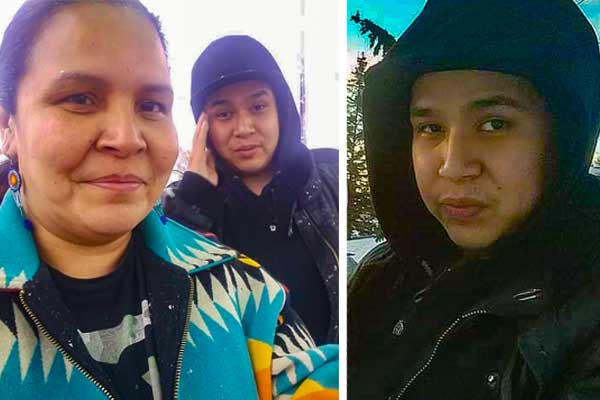 Tanya Sugar and her son Ashton Sugar (left) before addictions took over his life. Ashton Sugar (right) from Piapot First Nation had dreams of becoming a chemist or an engineer. Photo submitted by Tanya Sugar.

A mother of six children from the Piapot First Nation has a tent in her back yard, where she places food, water, clean clothes, a blanket and a pillow. This is her way to make sure her son is taken care of.

“We put them outside in the tent and they’re gone. I know that he comes around but doesn’t come inside the house,” said Tanya Sugar, who lives in Calgary.

Sugar’s son, Ashton, 22, doesn’t come into her home anymore, ever since he overdosed there in March. He’s been living on the streets in Calgary, addicted to fentanyl.

“He overdosed in the basement bathroom,” she said. “It was really scary because I didn’t know what to do…I tried to get him up (and I) kept talking to him. He finally snapped out of it and realized it was me. He started crying saying, ‘I’m so sorry mommy.’”

Since then, Sugar has kept a kit of the opioid antidote Naloxone, which can reverse the potentially fatal effects of an overdose.

Ashton didn’t come home after the overdose. But Sugar never lost hope in her son. She knew she’d eventually see him and she did, one day, but she didn’t expect to see him in the condition he was in.

“When I see our people on the streets, I talk to them to see if they’re okay and if they want some food and water,” she said. “One day, (my kids and I) were walking home from the store. (I saw someone) nodded out on a pile of plywood. I bumped the plywood and woken the man…and it was my son. It truly broke my heart. I asked him to come home and he said no. I told him he can always come home and that someone will always open the door for him. I walked away and started crying.”

Ashton has been using for almost five years now. Their family went through a tragic death a few years back.

Tanya Sugar’s sister was killed by their mother. It was something that Ashton could never heal from. At the time of the tragedy, Ashton carried a lot. When he was a young kid, in 2003, his father was killed in a gang party. Sugar didn’t tell her son about his father’s death until he became a teenager. When she did have that conversation with him, he became angry. Sugar believes this is what has led to his current drug addiction.

She focuses on who her son was before addictions took over his life.

“Ashton was really smart. He loved chemistry and wanted to pursue a career as an engineer or as a chemist,” she said. “I want him to get better because he’s so smart. He could do so much more. I hope, with him living on the streets, that he sees that’s his rock bottom.”

Sugar shares her story about her son on International Overdose Awareness Day with hopes that one day, her son will walk away from the drug addicted lifestyle.

“Never give up hope on an addict,” she said. “I never want to give up on him.”

International Overdose Awareness Day is a global event held on August 31 each year to raise awareness of overdose and reduce the stigma of drug-related death.

The provincial government has set up a free Take Home Naloxone Program with free training for Saskatchewan residents who are at risk of an opioid overdose, and for their friends and family who might witness an overdose.

A Naloxone treatment does not replace the need to seek immediate medical attention.

According to a statement by the Regina Police Service, since January 1, to August 31, there were 705 overdoses in Regina. Police attended 283 incidents, Narcan was used by police 49 times and there have been 60 deaths.
The signs of an opioid overdose include: