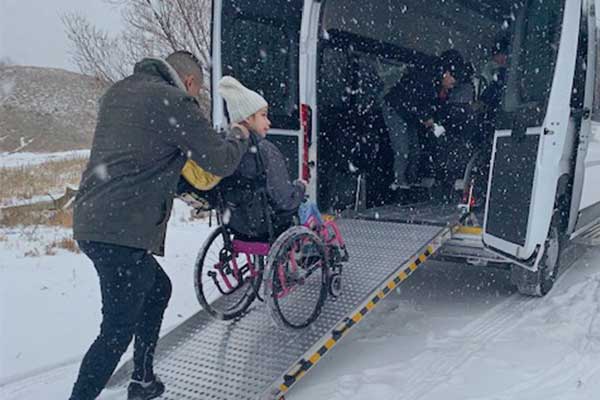 16-year-old Alashia rides the mobility van to Chief Payepot School. The van was funded by Jordan’s Principle and delivered by Move Mobility at the end of December. Photo Submitted


The wheels on the bus are going ’round and ’round for students with disabilities at Chief Payepot School, now that their new mobility van has arrived. The van has been bringing three disabled students to and from school since the end of December.

“When I found out, I did shed some tears, because it was such a barrier that we’ve crossed,” she said. “I wish we would have looked into this sooner for my niece.”

The van was funded by Jordan’s Principle, an organization that makes sure all First Nations children living in Canada can access the products, services and supports they need. Crowe began the process of applying for the van over the summer after she learned that one of her new students, Ben, uses a wheelchair.

“Over the summer, I found out that we have a little boy that was starting kindergarten that’s in a wheelchair,” she said. “And it scared me, because I thought of my niece – who had trouble getting to school since kindergarten – and I didn’t want the same thing to happen to this little boy.”

Charlene Fourhorns, Ben’s grandmother, says the mobility van has made a positive difference in her family’s daily routine.

“It's made transportation for Ben to school a whole lot easier,” she said. “Before, we were having our own little struggles to get him there. And now, just having that opportunity for him to have his own bus really made a difference, and we see it in him. He's really excited to go to school, he waits for his bus, and when he gets home, he's happy.”

Fourhorns is particularly pleased that Ben will now be able to go on field trips, since he missed out on opportunities in the fall.

“We were a little disappointed because, during the Agribition week, Ben wasn't able to go simply because we didn't have a way to take him,” she said. “So, he had to stay home.”

For Fourhorns, the most important feature of the mobility van is that it allows Ben to be more included in school life.

“The one thing I’ve learned with Ben is that I don’t want him to be treated different, and him not having a bus kind of put him there,” she said. “But now, because they have their own bus, they’re like all the other kids.”