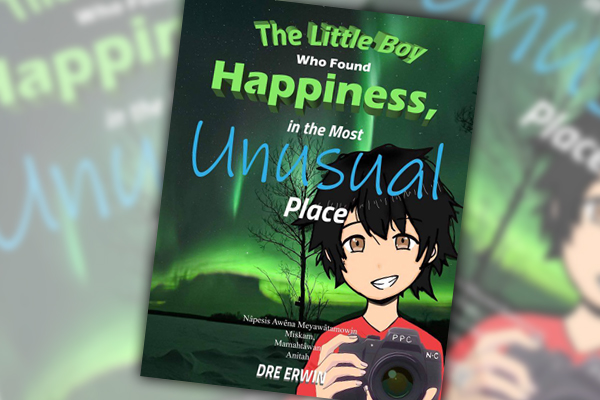 The true story of a Pinehouse boy who started having suicidal thoughts after losing his grandfather, but found life-saving solace in photography has been turned into an illustrated children’s book.

With the help of youth in the community, primary care nurse Dre Erwin created the book to bring awareness to mental health and suicide in northern Saskatchewan and how photography can be used as therapy.

The Little Boy who Found Happiness, in the Most Unusual Place went to number one on Amazon after being published on September 3, he said.

As a nurse in an isolated community, Erwin had seen depression and the results of depression first-hand. Knowing the problem is widespread, he wanted to draw attention to the lack of resources in northern communities.

“I was really motivated by the idea or the goal of helping other youth in other communities,” said Erwin.

“I felt upon myself to try and do more. What else can I do as a nurse besides wait for it to happen and I get a phone call? How can we prevent it?”

Erwin, originally from Regina, started a therapeutic photography club in 2016. After seeing how much it helped, he decided to write a book.

Involving the youth was an obvious project for the photography club.

A ten-year-old youth from the community created the lead character, and about dozen more contributed with illustrations and photographs used for backgrounds in the book.

“I wanted to include them as much as I could,” said Erwin.

Cree teacher Alfred Tinker from Pinehouse translated the story into Cree, so the book is also offers some language learning.

Erwin’s photography page on Facebook attracted the attention of a professional editor, who reached out to Erwin and edited the book for free.

Erwin also created the Canadian Photo Health Authority, an umbrella organization which now has connections across Canada, Erwin hopes to encourage more communication and have good messages in it.

Erwin encourages therapeutic photography, and says anyone can do it if they have a cell phone. The book can show everyone how this can be done in any community, he said.

“Think about how it made you feel to go out, what were you thinking when you took that picture. What do you want other people to think and feel when they look at your picture?”