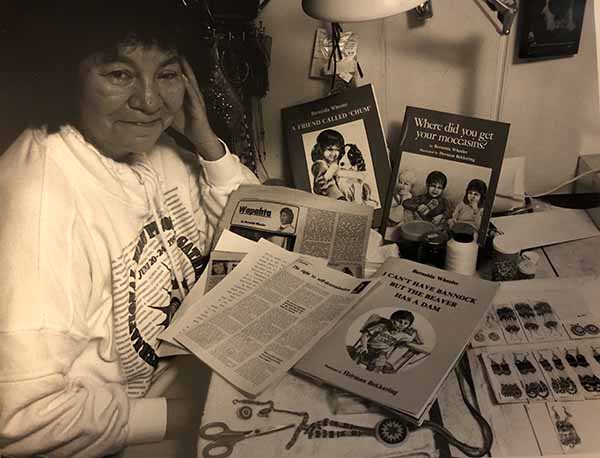 Bernelda Wheeler was a philosopher, an artist, a political critic, a dreamer, and trailblazer who kicked down doors and created space for the next generations.

“My Name is Bernelda Wheeler, and this is Our Native Land.”

For most of us, our mothers had a huge influence on shaping the people we became. Our late mother instilled in us a love of story and the arts, and a commitment to do what we could to help our communities retain our values and histories, and grow strong and healthy again. She was a writer, an actress, a community activist and among the first Indigenous women in media and journalism in Canada. What I did not realize until later in life, was that she had a huge impact on people across this land, people we never even knew.

Over the years many people shared that they looked forward to listening to her radio broadcasts and reading her newspaper columns. In rural communities and reserves, especially in those early years when there was no TV, folks relied on radio, newspapers and letters for information. She was most well-known for her ten years (1972-1982) as host and story producer on Our Native Land, the first national CBC weekly program dedicated to Indigenous history and life in Canada.

In the 1970s the radio program grew in popularity, along with the resurgence of Indigenous rights and cultural revival movements. It was a provocative, politicizing, Indigenous radio show dedicated to the histories, cultures, and current affairs of Indigenous peoples across Canada and beyond.

Like many trailblazers, our mom had to navigate the often conflicting intersections between two worlds. She practiced her media work with utmost professionalism and at the same time respected and followed traditional protocols and values. We watched her interviewing in pristine studios one day, then the next day she was out on the land, in tipis, or at political and social cultural events. While covering the Native Peoples Caravan protests on Parliament Hill in 1974 she got bashed up by the newly formed RCMP riot police unit, along with everyone else, and used her nursing skills to help patch up the wounded. She was back on parliament hill in the early 1980s during the Constitution repatriation talks. She regularly attended the annual Morley Ecumenical Conference—the culture teaching camps—on the Stony Reserve as a participant, and interviewed many Elders there. She went out of her way to discover little-known Indigenous musicians, and promoted them along with our better known musicians like Buffy St. Marie, Floyd Westerman, Paul Ortega, Willy Dunn, Shannon TwoFeathers, and many more, including traditional singers and drummers.

In 1982, our mom received the CBC “First Lady of Indigenous Broadcasting in Canada” award for her cutting edge journalism and programming. She was also nominated for two ACTRA awards for Best Writer and Best Radio Program for two outstanding investigative reports. One of these was on the treatment of Indigenous peoples on skid row in Winnipeg. I remember that time. She had her big tape recorder under her jacket and recorded the bouncers brutalizing patrons. She got knocked around in the crowd that time also.

After she left Our Native Land she was a counsellor at a men’s treatment centre, continued writing newspaper columns, and wrote awesome children’s books that are still being used today. Then she discovered acting and appeared on television, film, radio and on stage, all Indigenous productions, including The Rez Sisters. She loved the theatre. Our mom also continued writing.

In her later years she was a regular columnist for Eagle Feather News where she shared bits of history, commentary on contemporary issues, words of wisdom from Elders, life experiences, good stories, and deep thoughts. She was a philosopher, an artist, a political critic, a dreamer, and trailblazer who kicked down doors and created space for the next generations.

Our mom has been gone almost 16 years now and I’m heading into my mid-60s. But even after all that time, people still come over and shake my hand, “Oh! you’re Bernelda’s girl.” And they tell me they always looked forward to hearing her voice on the radio or reading her columns. Ya, I miss her too. But am so grateful for the legacy and teachings she left us with.