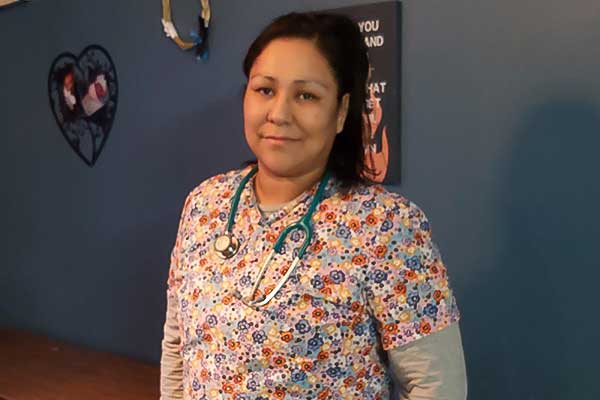 Leanne Lewis took advantage of a new program to earn her nursing degree.

Leanne Lewis laughs as she recounts her fears of pursuing her dream of becoming a nurse, that is, until she heard about a new program offered by the College of Nursing and Onion Lake Cree Nation.

“I have always wanted to become a nurse. My fear and lack of self confidence stopped me from moving forward. I doubted myself. My fear was being the only First Nation student and not being able to rely on anyone,” said Lewis. “Then an opportunity came where Onion Lake Cree Nation and the University of Saskatchewan College of Nursing collaborated and gave members of Onion Lake the opportunity to do their pre-professional year at home. I was living in Armstrong B.C. when I received a call from my mom who reminded me that this was the chance I was waiting for.”

Lewis knew that obtaining her degree was going to be challenging but never dreamed how difficult it would be to be separated from her family.

“My husband Gary and my four kids were getting ready to move to Saskatoon and then we had a discussion and we had to make the tough decision for me to move alone. I did not want to leave, it was so hard on all of us but we always said it would pay off in the long run,” she said.
Some of the challenges were particularly difficult for Lewis but she persevered.

“I made the drive home most weekends, and my family would sometimes come to Saskatoon to spend time with me. During midterms or when assignments were due, I wouldn’t see my family for weeks at a time. I worked when I came home, I tried to be there for my family but there was a lot of guilt for missing things like Christmas Concerts and birthdays,” Lewis states.

There were many times Lewis wanted to give up because of the guilt she experienced from being away from her family.

“I tried to quit in my third year. My husband and children would not allow me to quit and I made them proud by graduating. My next challenge is the National Council Licensure Examination. I will write that in March,” she said.

Lewis completed her Bachelor of Science in Nursing (BSN) program in June 2019 and was one of the first students to enter the program as part of the MOU with Onion Lake Cree Nation.

“The college’s program, Learn Where You Live, fit perfectly with the mandate of our reserve. They have a strategic plan that includes us as First Nations people gaining leadership roles once we have the education,”  Lewis said. “This mandate helped me to get the job I have now as a Home Care Nurse.”

When asked how the program helped her Lewis said, “The program made me realize who I was and how proud I am of being a First Nations Cree Woman from Onion Lake. I also encourage all young people considering nursing as a career to push themselves and they will be amazed at how resilient and strong they are.”