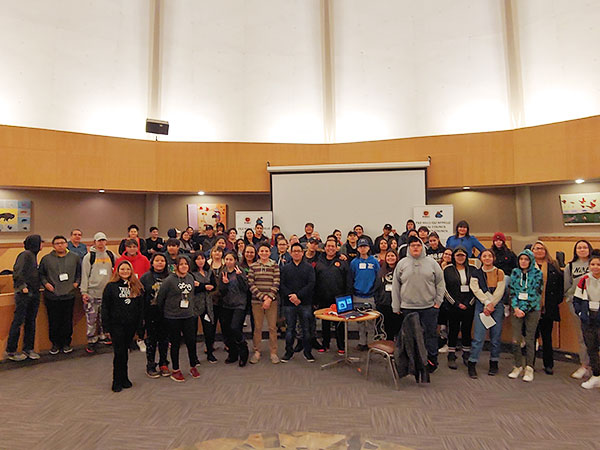 Tyson Creely, Community Justice Worker for File Hills Qu'Appelle Tribal Council, facilitated the anti-gang presentation. A former gang member himself, Creely spoke about how gangs, drugs and addiction are closely related to each other. Photo by Brad Bellegarde

Hundreds of youth from First Nations throughout the Treaty 4 territory packed into the Treaty 4 Governance Centre Tipi in Fort Qu’Appelle to talk about some serious topics.

It was an opportunity for youth to share and learn about some issues that they deal with on a day to day basis.

“We learned about addictions,” said grade 10 student, Tamaya Lavallee, who attends Payepot School on the Piapot First Nation. “It wasn’t only about crystal meth, it was about addictions and how to control yourself when you have an addiction.”

The two-day gathering was organized by the File Hills Qu’Appelle Women’s Council (FHQ) and focused on addictions, bullying and gangs.

“I learned no was no matter who you are or where you come from you will always have a meaning to life,” said Lavallee.

Lavallee who has been a fancy shawl dancer for 10 years is also the current Piapot First Nation Princess.

She wanted First Nations youth to know, “Even though you may see your older family members having addictions…it’s not worth it to put yourself through that.”
According to FHQ Women’s Council co-chair, Farrah Sugar, it was important for the council to organize an event that could empower First Nations youth.

“Our goal is to bring out awareness and help our youth stay on a healthy path in life.” said Sugar.

Sugar said that there is a large focus on drug awareness because there is a huge epidemic with [crystal] meth both off and on-reserve.

The Women’s Council is represented by each of the 11 First Nations in the File Hills Qu’Appelle Tribal Council.

According to Sugar, the need for these workshops is a result of community consultations and what the community wants help with.

“To be honest, I had a relapse a few months ago.” said McNabb. “I just wanted to know what could happen to the human body and how can I prevent myself from going down that road.”

Over the last 10 years, crystal meth has grown to be a major issue for both urban and First Nations communities throughout the province of Saskatchewan.

According to a May 2019 article published by CBC Saskatchewan, in 2013 only 3 per cent of people accessing addiction treatment services cited crystal meth as the reason. That number has jumped to 30.58 per cent in 2018.

“I been a victim from bullying too,” said McNabb. “When you get bullied it feels like you don’t have nobody and it leads to…getting high.”

In addition to Drug awareness, the gathering also focused on anti-bullying. According to Curtis Delorme, FHQ Youth Leadership Coordinator, bullying can lead youth to a path of depression, drugs and gangs.

“Our kids are lost.” said Delorme. “They’re hurting themselves, we’re losing too many to suicide, to gangs, to drugs and alcohol.”

Delorme said events like this give youth the tools to understand how these issues affect them, their families and the community.

Delorme who has worked with youth for over a decade is currently finishing his Indigenous Social Work degree while working full-time with FHQ.

He wants the youth to know, “You are gifts. We need you guys a lot. I want you guys to know that we all love you. We may not be related but we are all connected…there are people out there that love you.”