After a 28-year-old woman from Pasqua First Nation lost her eyesight, she became determined to be independent and strive on a road towards success.

“When I was put on oxygen, my brain wasn’t getting enough oxygen so it swelled up and damaged my optic nerves,” she said. “I’ve been blind ever since.”

Prior to Ketchemonia-Obey losing her eyesight, she wasn’t in a good place in her life and was unhappy with her choices.

“I didn’t have a good lifestyle before I lost my eyesight,” she said. “I had addictions. I didn’t live a healthy lifestyle. I partied a lot and I wasn’t very successful in school at first.”

Ketchemonia-Obey was enrolled in classes at the University of Saskatchewan (USask) but had failed due to lack of focus and desire. While she entered into the Early Childhood Program, it was then that she became sick and hospitalized which led to her health complications. Gradually, as days passed, she began to lose her eyesight.

Ketchemonia-Obey turned a negative into a positive. Instead of dropping out of school, Ketchemonia-Obey remained in school to finish her program and taught herself to use braille. She didn’t allow self-pity in her life after she became visually impaired. She pushed herself to live a better lifestyle.

“I [sought] counselling for my grief and loss. I started attending church and I surrounded myself around positive influences,” she said. “I became focused and set a lot of goals for myself. I took care of my spirit and I made sure that I prayed a lot. I [didn’t] want to be stuck anymore. After losing my eyesight, it was an extra push to motivate myself to keep going. If I can finish school while being on oxygen and going blind, I feel like I can do anything.” 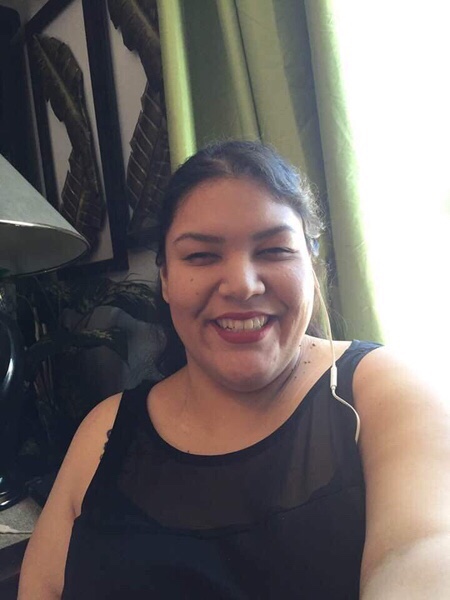 Stella Ketchemonia-Obey fell sick three years ago so she was hospitalized and put on 24/7 oxygen due to a collapsed lung. It was then that Ketchemonia-Obey started to lose her eyesight. Photo supplied

Ketchemonia-Obey exercised a lot to strengthen her lungs and heart to maintain a good oxygen level which resulted in ridden the dependency of oxygen tanks. She utilized the programs with the Canadian National Institute for the Blind (CNIB) for a couple of years which helped her transition to living independently.

Her positivity even captured the attention of a man who is now her fiancé.

“We just got engaged in February,” she said. “At the end of the summer is when we plan to get married.”

Her advice for others is to keep moving forward and never let anything hold you back.

“I know that sounds like a cliché but it really is true once you set your mind to something,” she said. “Make goals for yourself and it can take you far. Keep focused on what you want.”