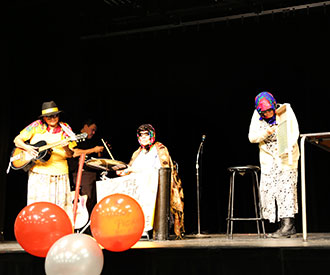 
Women of the Dawn counseling centre’s first banquet and karaoke fundraiser took place the night of October 18 at the Regina Performing Arts Centre.

Women of the Dawn offers counseling, career planning and other supports to individuals, families and groups who have experienced the residential school system.

According to director Ivy Kennedy, through ticket sales, sponsors and a silent auction featuring a beaded moss bag and a signed Saskatchewan Roughriders jersey, the event raised over $25,000 to support the organization’s programming. 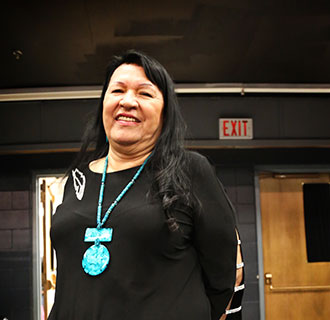 “Now we can repair the roof on our building, which is falling apart, and we’ve raised $5000 for the Christmas party for the children,” Kennedy explained. “The rest of it will go into the operating budget of the organization.”

Joanne Lerat, who works at Women of the Dawn, said preparing for the Christmas party was one of the night’s primary goals.

“For the Christmas party, the community comes and signs their kids up, and we give them free gifts, and they have a turkey supper, and just have a lot of fun that evening,” she said. “It means a lot to me. It’s nice to see these children having a good time.”

Kennedy hopes to turn this fundraiser into an annual event. A 2019 Federal Liberal candidate for Regina-Qu’Appelle Jordan Ames-Sinclair, who was in attendance, is looking forward to it.

“These organizations are so important to our community,” he said. “So, next time, I want to see the entire place packed. I want to see it out the door.”

The evening included a slideshow tribute to FSIN Vice Chief Heather Bear, who could not be in attendance because she is currently receiving treatment for cancer. Her family was presented with a star quilt in her honour. 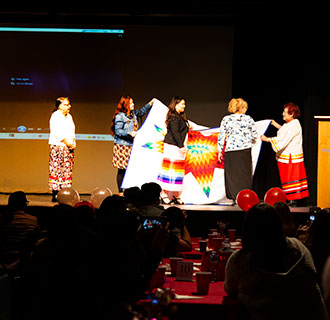 Members of Vice Chief Heather Bear’s family are presented with a star quilt in her honour. Photo credit: Julia Peterson

“I want people to know about the dedication of the First Nations women of Saskatchewan – the hard work that we do as mothers and kokums throughout the community,” Kennedy said.

“We have to be strong, and we are known as the backbone of our society, so when we see women as tribal chiefs like … Vice Chief Heather Bear, it encourages us. It encourages our children to go on.”

After dinner, there was a karaoke competition with a first prize of $1000. After calling nine semi-finalists back to the stage, the judges awarded the win to Marina Windigo for her performance of Patsy Kline’s ‘Crazy’ and Keith Whitley’s ‘Don’t Close Your Eyes.’