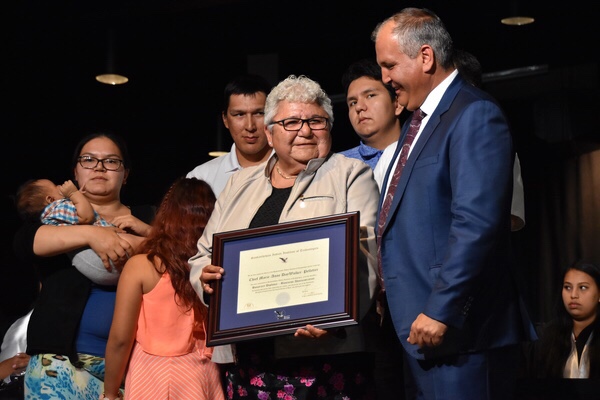 Honorary diploma recipient Chief Marie-Ann DayWalker-Pelletier at the 2018 SIIT Spring Convocation in Saskatoon. She has been chief of her community for 37 years.

An enthusiastic young class of 241 graduates are ready for a new chapter of their lives, and the country’s longest serving Chief received an honourary diploma, as the Saskatchewan Indian Institute of Technologies (SIIT) celebrated their 2018 spring convocation.

It was all smiles, and a few tears of joy from families and students alike, as the graduates from all three SIIT Campuses were honoured on June 14th at Prairieland Park in Saskatoon.

“It's a real celebration for us,” said Tavia Laliberte, SIIT’s VP of Academics. “We support students through their economic and academic life as they move into the workplace. This is one step in the process and certainly something that needs to be celebrated.”

This year’s convocation saw a few important firsts, including the first graduating class from the Mental Health and Wellness Program, a program created in response to the Truth and Reconciliation Calls to Action. SIIT also honoured Chief Marie-Ann DayWalker-Pelletier with an honorary diploma in business administration.

“It’s a real honour,” DayWalker-Pelletier told Eagle Feather News. “I’m excited about it but this goes to my people, my community. If it wasn’t for them, and for me to be able to walk with them, I wouldn't be here.”

DayWalker-Pelletier has served as Chief of Okanese First Nation for an astounding 37 years, being first elected as Chief in 1981 when she was only 26 years old. DayWalker-Pelletier is the longest serving Chief in all of Canada and has been invaluable for both her community and her country for her commitment to the Missing and Murdered Women issue, advocacy of traditional teachings and culture, and countless other vocations.

“Thirty-seven years is a commitment. My family had to sacrifice and sometimes become independent without me. My message is to keep going. When you fall, get up and keep going,” she said. “Through all the trauma we've had as a people, we've been able to rise above that and build on the successes of our people and ancestors.”

“I can’t think of a more deserving candidate,” added Riel Bellegarde, SIIT President and CEO, explaining that the honorary diploma is SIIT’s highest honour. “(Her) history as a leader speaks for itself. She is a great role model for our students and a strong advocate for education.” 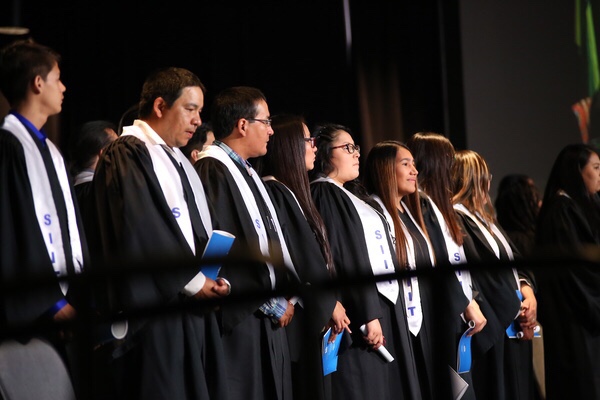 Graduates at the 2018 SIIT Spring Convocation in Saskatoon

Perhaps following in her footsteps, several young graduates shared their stories of the commitment, sacrifices, and joys experienced during their studies at SIIT.

Dilynn Kehler, graduate in Business Administration from the Regina campus, shared her story of overcoming her serious financial and family struggles, crediting her children and her family at SIIT for what she’s been able to accomplish.

“With the advice and guidance of my instructor and the support of my peers, I am able to stand here today,” said Kehler. “I have learned things (at SIIT) that have changed my outlook on life...with this kind of support, we know we can accomplish anything.”

Violet Swan, a graduate from SIIT’s Saskatoon campus, was one of the student-leaders who helped create the pride centre, making the campus a more inclusive and welcoming place for generations of students after her.

“SIIT has a strong history of being a welcoming environment to all of our peoples. The pride centre has been another step forward in welcoming people of all backgrounds,” said Swan.

“It’s through cultural teachings that we were all able to come together as a community to strengthen our minds and spirits. SIIT has showing us that culture has a place in education.”