After that last blast of cold weather that made mere breathing painful, I suggested a trip to Mexico to my partner. My boyfriend was reluctant because a Mexican resort isn’t “off-the-beaten-track” enough for him. (This is in direct opposition to my mom who equates Mexico with Mad Max Beyond Thunderdome brutality.) 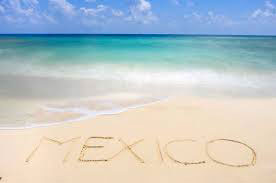 But I reminded my boyfriend that this is the last time that our toddler can fly for free….

We bought the tickets.

I enjoy spending time in Mexico, a country full of brown people – it’s exactly like being on my reserve if we had soft sand, an ocean and sunshine. Or maybe Canada some day if Native people keep up our birth rates and climate change continues its dark magic.

I was worried about our travel day as the plane ride is about five hours long and toddlers – well, they ain’t known for their patience. But other than being crammed into a plane so crowded that it would make clowns nervous, our trip down was uneventful. Our son came close to losing it on the plane but saved his actual breakdown for when we were at Mexican customs – while I held him, he alternated between yelling, struggling to get out of my arms and eating my hair. Yes, eating my hair.

Unlike 90% of dating profiles, the resort was exactly what the pictures had portrayed. Lovely palm trees, an open-air lobby and the ocean waves visible from the check in desk.

But before I could enjoy, I had to fight my way through a sales pitch with a timeshare salesperson – “Would you like a timeshare?” “No.” “Want to sit through our sales meeting tomorrow morning?” “No.” “How about if we offer you $50.00 to attend?” “Okay.”

We went for a swim, then dinner and then hung out on the beach until the sun went down. I fell asleep to the sound of the waves hitting the beach and my last thought was, “What happens if there’s a tsunami?”

When we booked the trip, we did wonder if there would be enough things for the toddler to do while at the resort. It turns out that our toddler only needs one thing to have a good time: sand. He rolls in it, makes sand angels, kicks it in our faces – really, the possibilities are endless. He would also take the sand and throw it at the ocean. Though quite far from the ocean as our son had a healthy fear of it. This made sense because the ocean was out of control. I walked into the waves and felt like I was being physically assaulted by them. I got tossed around like the ocean was trying to rob me – of my shorts.

There were other moments that reminded me of home. I kept seeing pick up trucks with families sitting in the back. It was like pictures I’ve seen of all my cousins and me piled into trucks, seatbelts be damned.

Baby proofing had not been a priority at our hotel. The toddler quickly found out that the bathroom door wouldn’t lock which meant that privacy was a joke. He kept barging in whenever one of us was inside – just to make sure we weren’t doing anything fun or that involved candy.

Our toddler also learned to open the hotel room door. My partner discovered this while I was out of the room when the toddler opened the door and ran out. His dad rushed out behind him, wearing only his gitch as the hotel door locked shut behind him.

When I went shopping, I had an experience that really made me feel at home. I wandered into a store that was like a Mexican Costco which sold a fashion line of booty cut jean shorts designed by Jennifer Lopez (which of course I had to have.) I handed over some cash but the cash register didn’t have enough money for change so the clerk called out to her manager. He checked his own wallet for the required change. He didn’t have it so a junior employee brought out his wallet. Between the three of them, they found the pesos. I looked around to see if I was on camera as I accepted the cash from someone’s pocket.

Out of all the places I’ve visited, Mexico feels the most like home. In fact, I think my band should buy some TLE land down there – for a small fee, I’ll even find the land for them.