Saskatoon satire news writer hopes his website and video channel provides his audience with laughter along with the latest news.

Ryan Moccasin from the Saulteaux First Nation launched “The Feather” satirical news site a few month ago and calls his form of news written with an Indigenous slant. He was inspired by watching the Daily Show with Jon Stewart growing up and believes that is where a lot of young people obtain their news from.

“[Satirical news sites] kind of point out the truth. The real job of journalism is to speak truth to power and our job is to take that truth and use it to make fun of those in power,” he said. “Taking a comical twist on the real news that happens and you can find ways to make people laugh out of it. At the end of the day, satirical news is helping people find laughter through all the madness.” 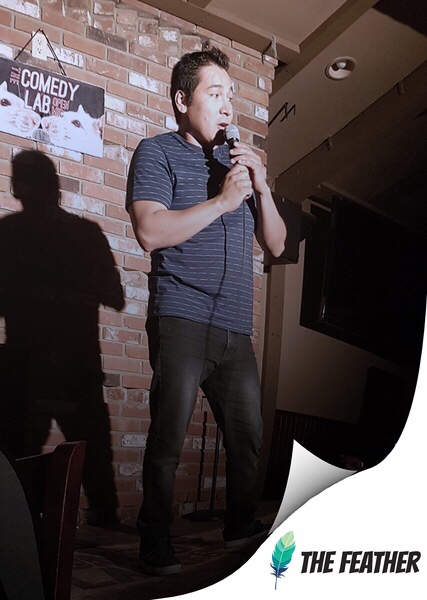 Ryan Moccasin is the founder of “The Feather” a satirical news site which contains exaggerated truths with an added twist of humour in the stories he writes. Photo submitted.

Moccasin got his start as a freelancer for the Indigenous Times over five years ago and later found his comfort in making people laugh – in which he did with stand-up comedy shows.

“I met people who were great writers and threw me ideas for headlines,” he said. “Shaun Cuthand and Danny Knight are helping me write and shoot some video content. I’m bringing other comedians in as well to help me write some more comedy monologues so we can post them on YouTube for The Feather.”

Moccasin writes 2-3 articles a week and is uplifted when he sees the responses on social media. It’s a feeling that makes him want to continue his passion for writing and making people laugh.

Although he isn’t funded or doesn’t make any money off of “The Feather”, he does it for the people.

He said at times he finds “The Feather” is compared to the similar satirical news site “The Walking Eagle” but it’s something he doesn’t mind.

“I reached out to [Tim Fontaine]. He’s a real good writer and he’s doing strong stuff. There’s some parallels that can be drawn,” said Moccasin.

He said he’s drawn into the discussions people have online as he thinks many tend to believe everything they read on social media. Moccasin added that one thing we can control is intention but not perception when it comes to reading news online. When he’s writing his articles, he does his best to exaggerate the truth and add a comical twist.

“Once it’s released on social media, weird stuff happens. People read the headline and they believe what’s real without further investigating what’s written in the article. That’s one thing that’s out of our control, unfortunately,” he said. “There’s a place for satire. These days, the truth [in news] seems to be stranger than fiction so I think that satire is more important than ever because it helps people sort through the madness and hopefully, find a laughter through it all. That’s really the goal of ‘The Feather’.”

Moccasin said he is always open to submissions of people’s ideas for headlines. Stories and videos of “The Feather” can be found on social media and YouTube.