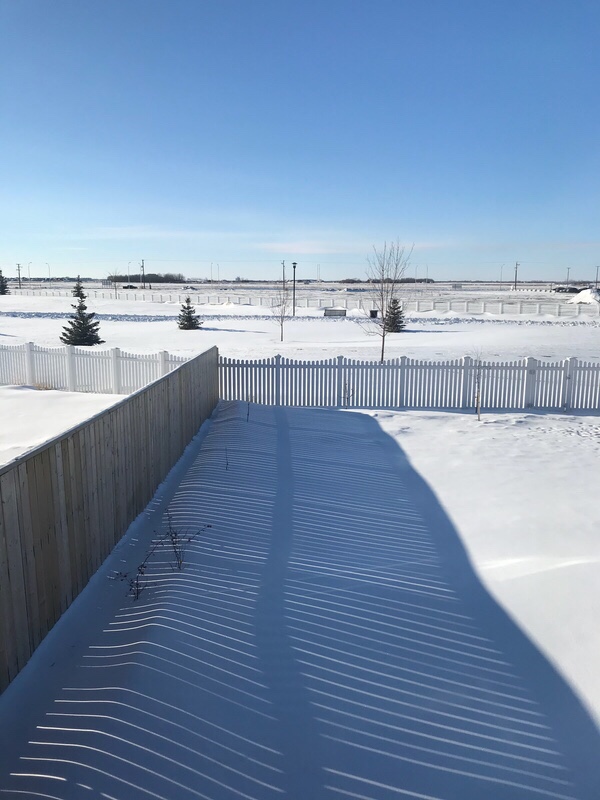 It’s sunny out, so it must be nice, right? Wrong.

This last cold spell almost gave me a panic attack. On the third minus thirty day, I opened the front door, stuck my head out and was forced back inside by the biting cold. It’s a horrible feeling knowing that you cannot go anywhere – it’s like being trapped in a haunted house surrounded by wolves and sharks and the only board game available is RISK.

Then I remembered that I have great internet, cable and enough Triscuit crackers to get me through three winters. (And I would never allow RISK into my house anyway so …)

But weather can get you down because it increases the difficulty of life exponentially. I’m already hauling around a slippery toddler so life is challenging most days. It’s so cold in Saskatchewan, that we have weather-related terms like wind-chill, which is a fancy way of saying that the air hurts your face. Do you think people in Australia know about wind-chill? No. If they heard the term they would think that our wind is just really laid back.

But we get to hear, on a regular basis, weather people cheerfully make pronouncements like: “Hey everyone, it’s minus 25 with a wind-chill of minus 40 so exposed skin will freeze in thirty seconds.” And they are not fear-mongering, I was searching for my car plug in one morning and my face froze like a Beverly Hills trophy wife/husband.

Nothing works in this weather. Take my vehicle – in cold weather the following has happened to me: a battery froze (that was plugged in), two of my tires went flat in the same night, and the defrost just decided to stop working. Even if your vehicle does you the great favour of starting, you’re basically driving a block of ice until you reach your destination.

Everything that used to take “just a sec” now takes ten times longer. You can’t pop out the door with a light jacket and some sneakers. Trips to the grocery store take planning – layers of clothing that impede your movement like a wetsuit. Then if you have kids– they gotta be stuffed into the same outfit while yelling, “NO NO NO NO!” (In toddler-ese, “no” has several meanings including, “I’m hungry,” “Cartoons!”, “I’m tired,” and “the cat is looking at me funny.”)

During the worst of the cold spell, I saw some of my friends posting pics from Mexico and I cheered them on like I’m lying on my deathbed. As I glimpsed their photos of sunny days lounging around a pool, I was typing tearfully into the computer: “You go live life: you dance in that sand, you drink those mojitos, you wallow in that guacamole. It’s too late for me.”

When its this bad, it does make you wonder, how did those old people survive on the prairies during a cold spell? I’m sure the answer is equal parts toughness and gigantic buffalo coats. I don’t have either but I do have these tips:

1. Buy in bulk – and I mean everything. The more food and other essentials that you buy the better chance you won’t have to run out at 10 p.m. in a frigid whiteout to buy toilet paper.

2. Invest in warm stuff – I know when you were a kid, your mom probably said that you could stuff your thin jacket with newspaper and that would keep you warm. It does not. And it makes you super-flammable especially if you are a smoker. So, save those old issues of Eagle Feather and get yourself a warm coat, preferably something filled with down. And nothing can compensate for quality mitts and gloves when you have to touch metal. Bare skin and metal is the ultimate clingy relationship – painful to stay, difficult to extricate yourself.

3. Take hot showers – Sounds crazy but it works. I learned this tip from a guy who was into winter running. He would take a hot shower before going out for his run and would stay toasty through the run. So, it’s a good tip. Here’s another good tip: winter-running is insane.

In any event, its only two more months of true winter left and then we can go back to collectively deluding ourselves that winter isn’t all that bad.