That’s What She Said: Fairy Tales through the eyes of an adult 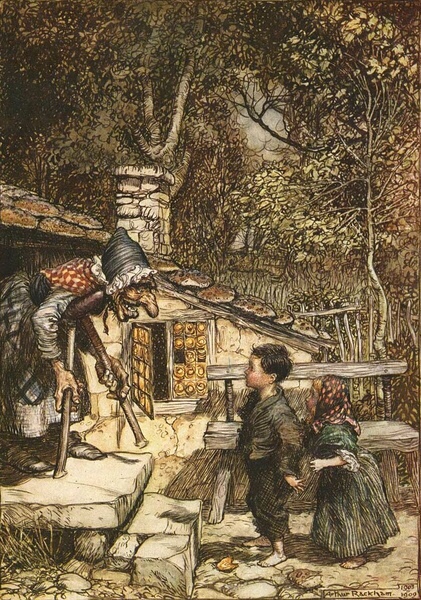 When you look at children’s fairy tales, like Hansel and Gretel, through the eyes of an adult, all of a sudden the stories don’t seem so innocent! Public domain, Wikipedia

They say reading to a child is the number one thing that increases a child’s intellectual development. Sadly, I do that reading off options as you scroll past them on Netflix accounts. I grew up reading fairy-tales and I’ve enjoyed re-encountering them with my kid. However, with an adult’s eyes, while they may encompass grains of truth about the human condition, these tales make me raise an eyebrow or two.

Take the story of Goldilocks and the Three Bears which is currently on rotation in our house. You have a little girl with blonde hair who breaks into the house of the bears. She eats their porridge, sits in their chairs (breaks one) and then heads upstairs to make herself more comfortable – if that ain’t a metaphor for colonialism I don’t know what is.

She tries out the bears beds and it is here that I note that Momma Bear and Daddy Bear have separate beds. That can’t be good. Everyone knows that separate beds generally lead to separate bears. This is probably why baby bear keeps acting babyish and whining incessantly about someone eating his porridge - any other kid would instantly just ask for frosted flakes.

Then nothing happens to Goldilocks when she’s found out. She just scampers off, back to her gated community. Typical white privilege and the bears can’t exactly call the police because nobody is going to take a brown bear’s word over a blonde white girl. And ursine’s don’t bear up under questioning; mostly because when they’re under stress, they eat their questioners.

Another story I loved as a child but now question as an adult is Sleeping Beauty. It’s about a princess who pricks her finger on a spinning needle and falls unconscious. This tale reveals the necessity of the #metoo movement. Because when the Prince comes upon this unconscious woman, his first instinct is to kiss her – and I’m just going to come out and say it –this guy is a pig, and probably the great great great grandfather of Brett Kavanaugh. Do not invite guys like this to parties is what I’m saying.

This story is also concerning because it focusses a lot on the heroine’s looks. It’s literally called “Sleeping Beauty” as if a woman who is beautiful literally requires no personal power in life – no personality, no ambitions - except the ability to sleep. Then after the perverted prince kisses her, the princess opens her eyes and realizes that she’s in love with him. Seriously, lady? After a single kiss – which you were asleep for, you think he’s the one? At least see if he has a good job and can give a decent hickey before you dive in.

Hansel and Gretel is a story I probably won’t be telling my kid until he’s at least twenty because that is one freakishly scary story. The kids – DAD – takes them into the forest to lose them because his new wife decided they were a pain in the ass. That’s some cruel shit right there. The dad leads the kids into the woods to lose them but the kids devise a trail of breadcrumbs so that they can make it back to their dysfunctional home. The birds eat the breadcrumbs because birds are assholes. But these kids are tough and they keep walking until they come upon a house made of candy. And like most people, they think – jackpot! But no, it’s actually the home of a witch who built the candy-house to lure kids inside to eat them. Seriously, do these kids have any luck?

The witch invites the kids in and gets them to help prepare the stove in which she’s going to cook them. I’m not exactly sure how you install a hot stove in a house made of candy – the physics just don’t add up. Then the kids overcome the witch and throw her in the stove - yay. Although let’s be honest, the witch isn’t the worst person in this story, she’s not even the second worst. This story might be the greatest metaphor for the youth of today overcoming this polluted world of corporate greed that we’ve left them.

Storytime is an important time at our house and a great time for learning. Mostly learning about how crazy people used to be (and, really, still are) but learning nonetheless.