That’s What She Said: It’s a puppy party

For no particular reason, I decided to go and make my life 100% more difficult and got a puppy. Well, I did have a reason, I’ve always wanted a dog to go running with. I haven’t run with a dog since I was a teenager and my dog then was a three legged sweetie (my family never got dogs, we generally took in whatever was dropped off in our front yard.) That dog – a male my mom named Marsha because she’s crazy (my mom, not the dog) – always tried to run in front of me which meant that my runs were a chaotic mess of trying to run around or jump over our well-meaning crooked-legged pooch. 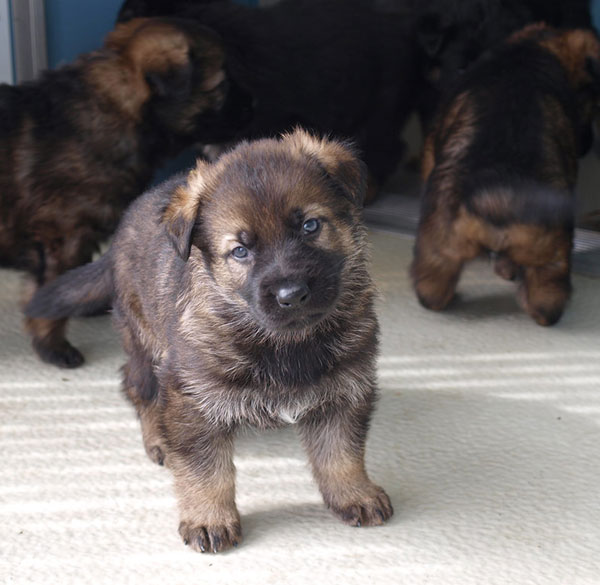 This isn’t Dawn’s puppy, but we’re sure hers is just as cute. Stock photo

So, my goal was to get a dog big enough to run with. But the SPCA only had puppies available. I was shown a black and grey puppy – the last of a litter. His name was Stormy. They showed us into a “socialization room” where my four-year-old and I met him for the first time. My toddler wasn’t very impressed and kept trying to get the puppy to play on the cat furniture. I had to explain that puppies can’t climb.

“Then we should get a baby kitty,” my toddler asserted. I somewhat agreed as I’ve always been more of a cat lover than a dog person but running is where dogs have the upper hand.

The puppy had a cone around his head. The dog attendant explained that he just had “the operation” and needed to keep his cone on for seven days.

“Right, so he just got spayed,” I explained to my toddler.

The young woman corrected me. “Neutered.”

“Right its cats that are spayed.”

The clerk backed away before she had any more misgivings about my lack of experience with animals.

We decided to take him. While I was paying for the dog, one of the clerks said, “Uh, your pup is having some problems with diarrhea.”

I felt this was the universe testing me. “How bad do you want a dog, Dawn?”

I smiled and said, “That’s not a big deal.” I figured he’s a pup, how bad could a little dog’s diarrhea be?

My question was answered about ten minutes after we got in the house. It went on through the night and into the morning. So, the universe was really testing me: “Hey, you said you wanted a dog. Here’s a damned dog.”

I called a vet from the SPCA approved list to ask about the diarrhea: “What’s up with puppy diarrhea – how is there more of it than of him?”

They assured me that it was perfectly normal and would go away on its own. My second question was, “Does this vet clinic also handle after hours gunshot wounds?” Because you never know, right?

After a couple days, the diarrhea went away and I felt at peace with my decision as I watched my toddler play with the dog at least until he said, “So, when does our puppy turn into a kitty?”

“That could be awhile.”

Personally, I'm looking forward to when the pup turns into a dog because safety is a concern as a woman always.

The other day I was on a walk with my toddler and the pup, and my son asked to go down by the river along a path. My son is a rather safe boy so I was excited when he made the suggestion. We were throwing rocks and playing with the pup when I spotted three men along the shore. I couldn't see what they were doing so I asked my four-year-old who simply replied, "throwing rocks." I didn't pay them any more attention.

Then we got ready to leave and my toddler jumped back into the stroller (along with being risk-averse, he’s also a bit lazy). I was struggling to get him up the hill when those three same men appeared to the right of me on bikes. Somehow our departures had coordinated at the exact time - a little too perfectly - I immediately felt unsafe especially since they looked like dirtballs. But luck was with me and right before the first bicycle would have been in front of me - the guy wiped out. The other two stopped behind him. Another stroke of luck - another bicyclist appeared from the other direction right at that moment. He just looked like a regular dude and asked the guy who fell if he was okay. I didn't. I just gave the three dirtballs the patented Dumont glare.

I do feel like the universe was protecting me and my kid that day but I won't be going down there again. Not at least until my pup is a solid crotch-biter.