That’s What She Said: Things that make you go boo

IT, a movie about a demonic sewer clown, was released a few weeks ago and everyone I knew was like did you see IT? I don’t go to many movies, our toddler has made it clear that movie theatres are for running in the aisles, not sitting and that the best popcorn is popcorn scavenged from the floor – so no, I did not see it.

Whether you saw IT or not, people were convinced that IT was the scariest thing ever. I saw the trailers and I was like, “meh.” Clowns have never been scary to me. More like, weird, dumb and boring. But never scary. Probably the scariest thing about clowns is forcing me to watch them for an entire movie. The mere act of putting makeup on your face makes you not scary - how can you be afraid of someone who takes longer to get ready than Kim Kardashian? Also, I look at that clown and all I can think of is how that greasy make up must be clogging his pores. He’s in for some big cyst pimple action down the road. Maybe in between tormenting kids, he should sneak in a facial. Also, how does he chase people down in those big floppy shoes? 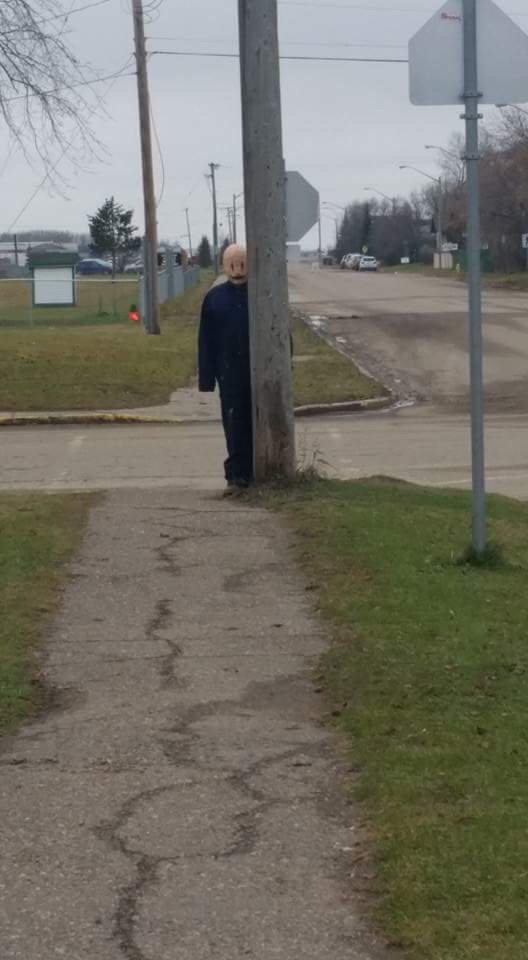 Clowns may not scare you, but a guy in a mask lurking behind a telephone poll just might. Stock photo

But if clowns are the thing that makes your knees weak, then good for you. Movie makers are always looking for those things that scare the pants off people. When I was a kid, the scary movies were about masked serial killers targeting horny teens. It was as if the movies were written by a strict parent trying to scare their pants ON their kids. Those movies taught me that if you’re ever chased through the woods by a guy in a hockey mask, don’t run wildly with your hands waving in the air, you’ll always trip on a tree root and break your ankle. Walk at a quick pace, keep low and if you can, bring along a blonde with an aversion to bras.

Then scary movies got into kitsch and gore leading to treasures like Chuckie who was a child-sized doll with an oversized head that comes to life and is evil. I feel like that movie was only scary to baby sitters and hat-makers. Zombies, whether they are fast or slow, have had a long run (shamble?). Despite their body count, zombies aren’t evil; they’re just hungry. So if there is any evil in those movies, it comes from the people being preyed upon…so perhaps filmmakers are pointing out that humans are the real evil after all? Pretty deep.

There’s also movies about animals turned evil – like the Shark in Jaws and the Bear in The Revenant. I feel like that Bear was the physical embodiment of all the supermodel rage directed at Leonardo DiCaprio for dumping them and they sure gave him an asskicking - that was a truly cathartic scene. Generally large predators are the ones filmmakers focus on but I feel like its time that raccoons got their day. Yes, they’re cute but they also have claws and they’re sneaky.

I’m scared of snakes and heights. I’m not scared of one snake, one snake can be interesting, even beautiful. I’m scared of lots of snakes moving and crawling in all directions. As for heights, if you’re not scared of heights then you’re a fool – don’t you know people can’t fly? So with those two fears, you’d think the movie Snakes on a Plane would have given me nightmares. But Samuel Jackson took all the fear out of the movie; ain’t nobody need to be scared when Samuel Jackson is around. Maybe someone should look into a security system with his voice: “Get the hell off my lawn and the f*&* out of my neighborhood, you no-account, dumbass mo-f*cker.”

Generally scary movies want to get across two points: anything can be scary with the right music and that just when you think that you’re safe – then the killer will jump back up and attack again. This means, if you’re ever scared, just put on some elevator music and you should be fine. And, never – ever – turn your back on a clown - or a raccoon.