That’s What She Said: Time for the Ex 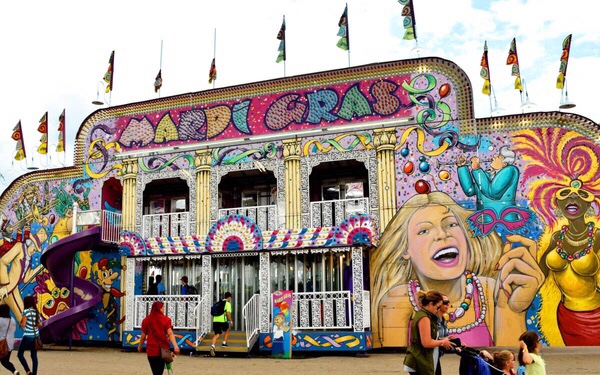 Do you make it to the Exhibition every year? Saskatoonexhibition.ca

My son is three years old and it is now time for his first Exhibition or fair as you may also know it. The fair, as in, “you better stop hitting your sister or you won’t be going to the fair this year!”

Three years old is a bit old I know for a “first” fair.

Normally in my family, kids are hauled around the fair grounds as early as a week old. But I am cheap and I knew that I wouldn’t get any points for bringing my son before his soft spot hardened and he retained the ability to develop long term memories. Now that he’s older, he can fully appreciate how awesome a mom I am.

We went to the fair each summer with my mom and dad. We would get a number of tickets and then some money for snacks and then my mom would disappear into the kids land with our baby sister and my dad would melt into the crowd with the other dads, all clad in western shirts and jeans no matter how hot it got outside.

The fair was the most exciting thing in our lives. Before the fair, our opportunities for fun were 2 channels on the T.V., a fire pit and a treehouse that we kept falling out of. So, you can imagine the fair literally blew our minds. We would wander around, our heads craned back taking in he full height of the rides. Our eyes would blink in concert with the blinking lights. Our stomachs would growl and flip over the cacophony of smells – fried chicken, fried potatoes, fried mars bars – the variety of food was endless. The rides ranged from mildly interesting to “I’m either gonna die or shit my pants and neither will help my chances at popularity.” I learned early how to disconnect the part of my brain that tells you when you get dizzy and so I would push my siblings towards the spinning rides, in order to avoid rides like the Zipper.

When we ran out of money, we knew where to find mom. But it was never a good idea to go look for her. Because by the time you found her, she would be red-faced and tired and ready to go park herself at the bingo tent and then you’d be stuck looking after the toddler. Or worse, she would have misplaced her youngest and you’d spend the next four hours looking for her.

How many times did we lose our youngest sister at the fair? I would estimate about five times. We always found her in the same place, at the security lost and found eating an ice cream cone.

It was better to go looking for dad. So, we would walk over to the fair casino and stand in the foyer marking the barrier between dads and kids. After being thrown out of the casino thousands of times, we knew better than to cross it. We became wily and learned that getting dad’s attention was a two kid-job. We’d eye up the security guard who would be eyeing us up. We would have to wait until dad made the mistake of walking past the foyer door. Then both of us would lunge through the door. The security guard could only catch one of us, before the other would make it to dad. This little adventure usually scored us about ten bucks which was enough for fries and a drink.

Evenings at the fair were spent in front of the grandstand listening to whatever band was playing. We would sit in the grass while mom would announce for the thousandth time: “Next time I’m bringing a blanket!” We would leave the fair around midnight: sunburnt with stomach aches from the bad food but fully sated on the fair experience.

My family has already feverishly begun their plans for the fair. Meeting places have been selected and they’ve already figured out which days will maximize their fun/wallets. To have the perfect fair experience, I have been told do the following: buy an unlimited ride pass, find a way to sneak water in the fair (baby bottles!) and of course, pack a blanket. Unlike my practised siblings, I have no illusions that I’ll last longer than a couple hours before dragging my toddler back to the car. But it’s nice to know that our family tradition is not only continuing, it’s getting stronger.